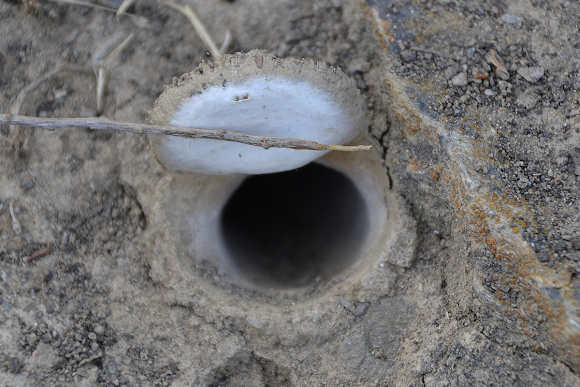 It was about the size of an eisenhower dollar. I moved a stick around the edge to try to get the spider to come out but it didn't. It might have been recently abandoned or the spider knew what's up.

Found in the chaparral/coastal sage scrub areas at Little Harbor campground (on the Whale's Tail). They're supposedly all over the island, and I think I've seen 3 so far.

I was out camping on Catalina when I found it, (and another abandoned one). They were both on a hillside and I found this one on accident really. I was climbing up and it was right in front of my face. And the other was partly destroyed and hanging out so that was easy to see!

Congratulations for this well deserved SOTD.

Congrats Kiloueka! I told you your photos were of high quality.

Great find Kiloueka,congrats on the SOTD and thanks for sharing

Congratulations Kiloueka...and honestly, the spider that carried out this wonderful feat of engineering deserves kudos too...just look at the "finish". I wish I could see one, some day.

Woohoo! Thanks everyone, this is awesome!

So much a part of my childhood growing up in California. Thanks for the fond reminiscence.

Congratulations on the SOTD Kiloueka ! I bet you've got quite a few feverishly looking for these now !! :)

This was such an awesome spotting that we just had to select it as our Spotting of the Day! Congratulations! What an impressive display of engineering and we're lucky that you happened to notice it. Thanks for sharing this and so many other wonderful wildlife encounters with us and great work on your Catalina Island mission!

Done Leuba! And Lauren I don't know if I saw any trip wires, I took a tiny stick and dragged it around the entrance to try to get the spider to come out but it never did. :(

These spiders lay out silk threads like "trip wires" several inches out from the trap door and when they are activated by a prey, the spider bursts out to grab it. Did you see the trip wires? The spider can probably tell the size of the prey from the vibrations.

Kiloueka, this is a great spotting. It would make it complete if you put in under "Notes" or "Habitat" what you have written as a comment - i.e, where you found it, etc. Thank you.

Just imagine...Look Ma, no hands and I made such a wonderful burrow, lined it, provided a lid....I am super impressed.

Beautiful work of art and engineering.

Super cool that you found that! I hope to see one someday too, just seem like they are so impossible to find

Lovely photos. Project Noah has missions all about "evidence of wildlife" and "nests, burrows, webs, etc." I do not see any problem with posting these.

It's pretty much impossible to tell what spider constructed this burrow unless the spider is, you know, actually visible.

These are great photos, don't get me wrong, but there's not much we can do other than enjoy the view.

Well that was a cheesy rhyme!

I was out camping on Catalina when I found it, (and another abandoned one). They were both on a hillside and were about the size of an eisenhower dollar. I found this one on accident really, I was climbing up and it was right in front of my face. And the other was partly destroyed and hanging out so that was easy to see!

kiloeka,how did you even find it? Is it obvious?How large is it?Where is the best place to look for these?