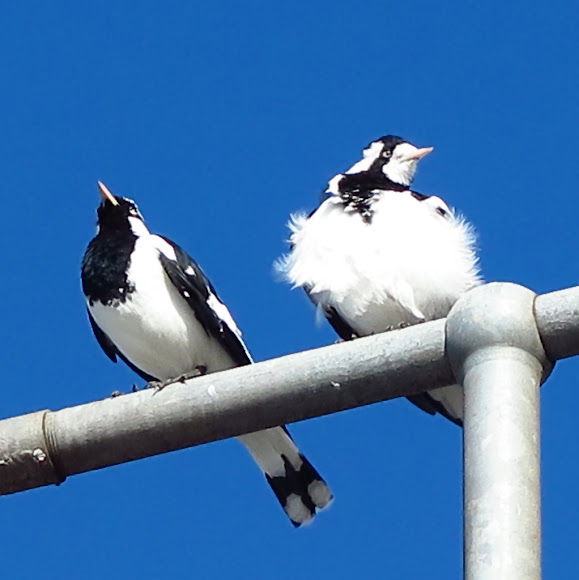 These are peewee's, one of my favourite Australian birds. They're cheeky and feisty, and not afraid to take on birds twice their size. They're around 26 to 30 cm long when fully grown, or about the same size as a European common blackbird, and boldly pied in black and white. It's not often that I see them together as they are here - the male on the left, and female the right. The sexes are similar from a distance but easy to tell apart: the female has a white throat, the male a black throat and a white "eyebrow". Mostly ground-dwelling, but these two were spotted on a railing beside a busy train line. A train actually zoomed past as I was taking these photos and they didn't bat an eyelid. I love their confidence.

Found in almost any habitat except rainforests and the driest deserts. Common and very widespread in urban and rural areas. This pair were spotted between a shopping centre carpark, busy road, and a railway line. It doesn't get much more urban than that.

Just for the record, I refuse to call this bird a magpie-lark, because it is neither a magpie nor a lark. To me, it is a peewee, the common name used in NSW and QLD. In Victoria and WA, it's known as a mudlark. It is often confused with the Australian magpie (Gymnorhina tibicen), even though the peewee is a smaller bird. The name "peewee" comes the sound of its distinctive calls.

I think so too. Not often I see them together like this... to do a comparison.