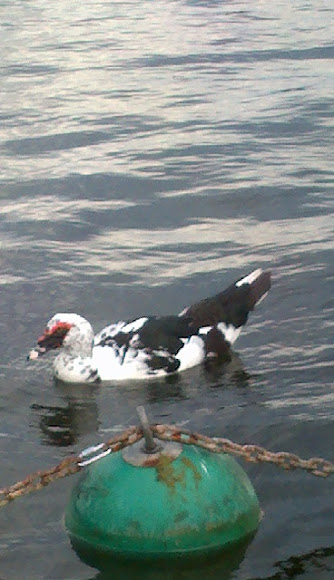 Supposedly more common along the Rio Grande, but I see these everywhere in Houston and its suburbs. Not nearly a fraction as often as mallards, but still not all that rare. Figured it was a Muscovy because of the red skin around the eyes.

More of these in the park with varying feather patterns and coloring.

I think some people eat roast duck. But I heard it labor intensive to prepare the meal. I had pet Geese and I could not eat them. ;)

Hahaha I am so alone in my thinking :'-(

That explains my craving for duck liver pâté when I came across that mulard ;-)

I know, I was really stumped last year with a duck and I had to read up on all the hybrids.Over in Europe they purposely breed the ducks with the purpose of flavor and plumpness. They are kept as live stock.

Yeah, one of the ducks I'm trying to identify looks like a mulard! It's hard to pick the right breed sometimes because of all the hybrids out there.

And this particular Muscovy wasn't so nice, but there are some more curious ones at Hermann Park. Some got close enough for pictures, which sadly didn't turn out so well.

It looks like one. Some times there's hybrids. These are friendly ducks.