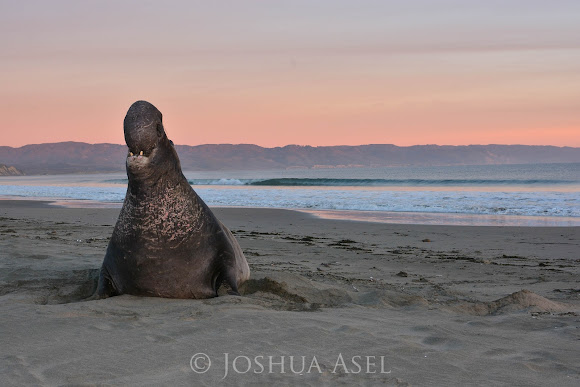 Just an hour away from Sonoma County, Point Reyes has some of the best wildlife viewing in California. A loner northern elephant seal sits hearty as the beachmaster, waiting for females to arrive at anytime. The scars covering his neck show his victory over all other males. His power is astounding. Over 14 feet long and weighing in a two and a half tonnes, his single barks rattle the cold air (and your bones at this distance). Elephant seals were hunted, along with whales, in the 18th century for their blubber, which was processed into oil for lamps and lubrication. As few as 50 remained in the wild, surviving at the edge of extinction in Guadalupe. Protection from Mexico and the game-changing fuel kerosene saved this subspecies from total annihilation. There are now over 225,000 and growing.

only visited once, it's a nice place and a nice picture

Thank you all for your nice and weird comments.

Great spotting Joshua,congrats on the well deserved SOTD and thanks for sharing

Thanks for bringing us this positive conservation success story Joshua, it is our Spotting of the Day!