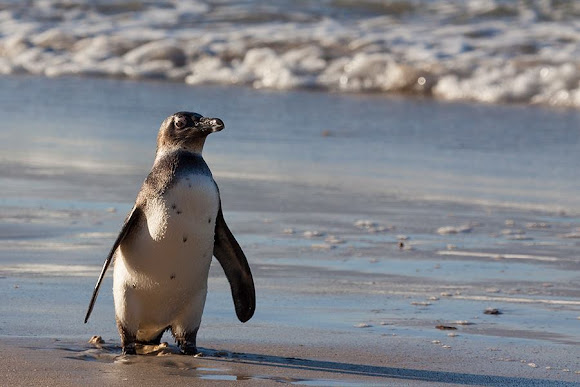 from Wikipedia "The African Penguin (Spheniscus demersus), also known as the Jackass Penguin and Black-footed Penguin is a species of penguin, confined to southern African waters. It is also widely known as the "Jackass" Penguin for its donkey-like bray, although several related species of South American penguins produce the same sound. Like all penguins it is flightless, with a streamlined body, and wings stiffened and flattened into flippers for a marine habitat. Adults weigh on average 2.2–3.5 kg (4.9–7.7 lb) and are 60–70 cm (24–28 in) tall. It has distinctive pink patches of skin above the eyes and a black facial mask; the body upperparts are black and sharply delineated from the white underparts, which are spotted and marked with a black band. This pink gland above their eyes helps them to cope with changing climates. When the temperature gets hotter, the body of the African Penguin sends more blood to these glands to be cooled by the air surrounding it. This then causes the gland to turn a darker shade of pink."

from Wikipedia "The African Penguin is found on the south-western coast of Africa, living in colonies on 24 islands between Namibia and Algoa Bay, near Port Elizabeth, South Africa. It is the only penguin species that breeds in Africa and its presence gave name to the Penguin Islands. With chicks, Boulders Beach, South Africa Two colonies were established by penguins in the 1980s on the mainland near Cape Town, namely Boulders Beach near Simon's Town and Stony Point in Betty's Bay. Mainland colonies probably only became possible in recent times due to the reduction of predator numbers, although the Betty's Bay colony has been attacked by leopards. The only other mainland colony is in Namibia, but it is not known when this was established. Boulders Beach is a tourist attraction, for the beach, swimming and the penguins.The penguins will allow people to approach them as close as a metre."

Lovely photo of this little guy, Roberto, and a great spotting. Very nice :-)