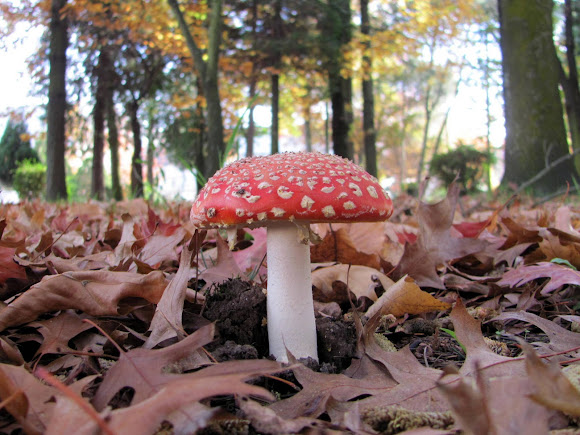 A large conspicuous mushroom, Amanita muscaria is generally common and numerous where it grows, and is often found in groups with basidiocarps in all stages of development. Fly agaric fruiting bodies emerge from the soil looking like a white egg, covered in the white warty material of the universal veil. Dissecting the mushroom at this stage will reveal a characteristic yellowish layer of skin under the veil which assists in identification. As the fungus grows, the red color appears through the broken veil and the warts become less prominent; they do not change in size but are reduced relative to the expanding skin area. The cap changes from globose to hemispherical, and finally to plate-like and flat in mature specimens.[31] Fully grown, the bright red cap is usually around 8–20 cm (3–8 in) in diameter, although larger specimens have been found. The red color may fade after rain and in older mushrooms.

Amanita muscaria is a cosmopolitan mushroom, native to conifer and deciduous woodlands throughout the temperate and boreal regions of the Northern Hemisphere,[26] includes high elevations of warmer latitudes in regions like Hindu Kush, the Mediterranean and also Central America. A recent molecular study proposes an ancestral origin in the Siberian–Beringian region in the Tertiary period before radiating outwards across all of Asia, Europe and North America.[26] Though generally encountered in autumn, the season can vary in different climates: fruiting occurs in summer and autumn across most of North America, but later in autumn and early winter on the Pacific coast. It is often found in similar locations to Boletus edulis, and may appear in fairy rings.[38] Conveyed with pine seedlings, it has been widely transported into the southern hemisphere, including Australia,[39] New Zealand,[40] South Africa[41] and South America, where it can be found in the southern Brazilian state of Paraná.[26] Ectomycorrhizal, Amanita muscaria forms symbiotic relationships with a great variety of trees, including pine, spruce, fir, birch, and cedar. Commonly seen under introduced trees,[42] A. muscaria is the fungal equivalent of a weed in New Zealand, Tasmania and Victoria, forming new associations with southern beech (Nothofagus).[43] It is also invading a rainforest in Australia, where it may be displacing the native species.[42] Furthermore, it appears to be spreading northwards, with recent reports placing it near Port Macquarie on the New South Wales north coast.[44] Although it has not spread to eucalypts in Australia, it has been recorded associating with them in Portugal

Spotted in the S.Joâo Hospital gardens,a place where i never imagined that could sustein such a amazing variety of fungis and trees,beautiful in this season

Atul,thanks my friend,no worries,no problem it's cool,i know, i haved missed to some spottings of my friends ,so it's life wecat bee here all the time :)

@thanks Fyn
@thanks Misako

Thanks again Karen ,i'am happy as you imagine with such a doses of attention from all,i'am blushed ,i have to by a little one to make that photo to post in FB :)

Congratulations my friend! What a wonderful series - all that's missing is a pixy sitting on top!

I'am making my comments in package's :) it would bee booring to comment each congrats menssage,i know you guy's understand,so second package:)
Thanks again all of you people,you are a fantastic community that i'am proud to bee part of,together we can change many things,lets continue with that in mind,thanks all :D

Wow,its a great feeling to have such a amazing reception,i'am Happy :),proud and i want to thanks every one for the support that you haved given to me since i join PN,great buddy's,allways prepared to give a hand,so i thanks all of you my friends for your's kind words and for the support

Congratulations António! I knew this beautiful spotting would go far! :-)