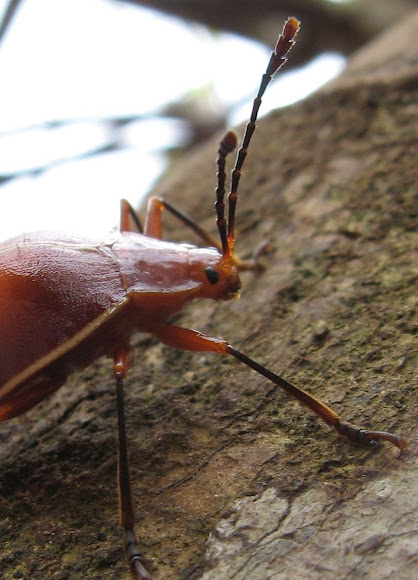 This is one of the numerous (900+ genera) Pleasing Fungus Beetles. A medium sized beetle (18 - 20 mm) its elytra form a high dome, more so than any other in our area. It is a uniform light brown from head to tail, including the legs except for the last joint and feet, which are black. There are four cream-colored “racing stripes” that go the length of the body; one on each edge of each elytron. When the elytra are closed, two of them form a single stripe, right down the middle of its back

This beetle was seen on a tree trunk in primary-growth forest in the Amazon rainforest of SE Ecuador (700 masl).

While this is the most common Pleasing Fungus Beetle in our corner of the world, it appears that isn’t the case elsewhere. I couldn’t find a previous register of it on PN nor did I find much on the internet other than pictures. I also found no common name. I think it rather pretty with its simplistic color pattern.