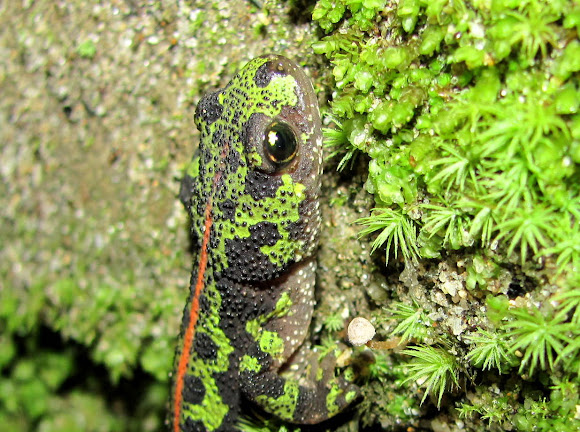 Marbled newts have dark brown or black bodies with irregular patterns of green. They have black bellies with off-white specks. Adult females have an orange stripe running down the back from the head to the tip of the tail. Juveniles also have this stripe, but it fades on males at about 9 months. Breeding males have a large wavy crest that runs from its neck down to the tip of its tail, but is a little bit shorter were the tail meets the body. The crest is striped yellowish-white with black. Adult Marbled Newts are from 5 inches (13 cm) to 6.5 inches (17 cm) long

Marbled newts live throughout most of France, and northern Spain west to the top third of Portugal. They have a slight overlap with the Pygmy Marbled Newt (T. pygmaeus), which take over southern Spain. Marbled Newts are absent from a lot of the Pyrenees because of dry and unstable conditions. In northern France the populations are more scattered due to the presence of the Great Crested Newt (t. cristatus), which the Marbled Newt hybridizes with to some extent. The higher elevation Mediterranean climates are the preferred habitat of Marbled Newts, and in the overlap, T. pygmaeus takes the lower elevations.

"Orientation toward breeding ponds plays an important role in the seasonal movements of amphibians. In this study, adult marbled newts were tested in a circular arena to determine sensory cues used to locate breeding ponds. Animals were collected from a temporary pond situated in northern Spain, taken to the experimental site 340 m distant, and tested for orientation under a variety of conditions (i.e., orientation under a clear night sky, orientation under an overcast night sky, and orientation under a clear night sky in the presence of an altered geomagnetic field). These investigations have demonstrated that the marbled newt is able to orient using celestial cues. Animals chose a compass course in the direction of their breeding pond only when celestial cues were available. Conversely, the ambient geomagnetic field does not seem to be relevant to orientation of marbled newts since they were unable to orient themselves using the ambient geomagnetic field in the absence of celestial cues."(Journal of Ethology September 2002, Volume 20, Issue 2, pp 137-141 Celestial orientation in the marbled newt (Triturus marmoratus) Javier F. Diego-Rasilla, Rosa M. Luengo) Spotted in river Homem félinhos beach,first time we saw one :)

Thanks guys for your words

Absolutely! - An ancient waterflow (now channeled) 'Pap-ere' ~Priest creek* is next to E.
(*The area was a church property in historical times.)

Thanks syzygy,this species is beautiful and not easy to spot,only in special clear nights in winter,they show up.The best places to spot salamanders and newts are the places near water,river's,pond's and sources,they return to the same places where they born,in order to breed,in my area i found 3 different species.The one you find was near water?

Here is a related one - my only Newt spotting so far shared here on board :
https://www.projectnoah.org/spottings/19...

Thanks HazelMarley,for your kind words

You can see that in all of the pictures it really blends in with the moss. Nice job! :)

Adeed to the http://www.projectnoah.org/missions/8015... mission

Thanks very much Claudia,to us it was the first time to :-)

Beautiful photos Antonio! I´ve never seen this specie before, it's really nice, and the colours.. Congrats!! =)

:-) we where making the last minutes in the place,i was just checking that wall and like you said sudently i saw those black eyes shining with the flash lamp ligth,but at first the body was dificult to see,the colour is almost the same as the moss, if you look well you can see a little mushroom in the rigth side near her foot :-)

I could imagine your surprise, instead of finding mushrooms, having one pair of black eyes starring at you!

Thanks Noah Citizen,i only saw it when i was a less than 50cm from her,i was looking for tiny mushrooms on the granit wall :-)

This one is really well hiding. Anyone could walk aside and not spotting it. Wonderful job!

Congrats António for your STOD.

and 94 other people favorited this spotting