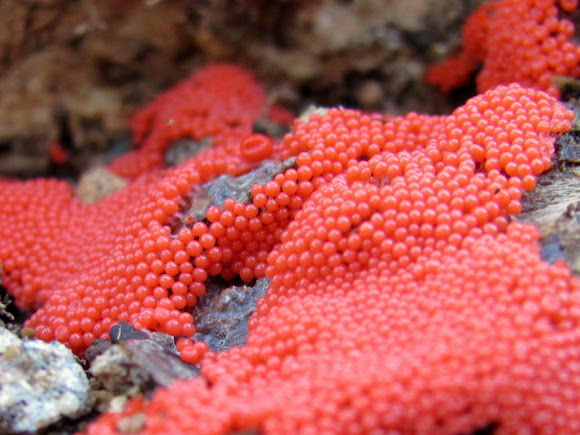 Sporocarps usually in dense groups, sharing a common hypothallus. Sporocarps at first spherical, ovate, short-cylindrical or pyriform, 1-2 mm tall, 0.5-1.0 mm diam., brownish orange, terracotta, ochraceous, olive or olive-brown. Stalk 0.3-0.8 mm long, concolorous with the sporotheca. Calyculus large, with a reticulum on the inside and a smooth rim. Capillitium elastic, connected only to the stalk apex, basal tubules 2-3 µm diam., 5-6 µm in the upper part, with free ends and sometimes with ± circular thickenings, decorated with warts and ± spirally arranged rings and half-rings and usually reticulate ridges. Spores pale ochraceous, 9-11 µm diam. Plasmodium pink, salmon or cream-coloured. An often easy to recognise family as the spore mass is typically brightly coloured, producing stalked or sessile sporangia. A capillitium often consisting of tubular threads branching at wide angles, smooth or ornamented with spines, warts, cog-like prominences or half-rings, free or attached threadlike elements --- ( http://www.hiddenforest.co.nz/slime/inde...... ) ------- Slime mold or mould is a broad term describing protists that use spores to reproduce. Slime molds were formerly classified as fungi, but are no longer considered part of this kingdom. Their common name refers to part of some of these organisms' life cycles where they can appear as gelatinous "slime". This is mostly seen with the myxomycetes, which are the only macroscopic slime molds. Slime molds have been found all over the world and feed on microorganisms that live in any type of dead plant material

these organisms are usually found in soil, lawns, and on the forest floor, commonly on deciduous logs. However, in tropical areas they are also common on inflorescences, fruits and in aerial situations (e.g., in the canopy of trees) and also grow in air conditioners, especially when the drain is blocked. In urban areas, they are found on mulch or even in the leaf mold in gutters. One of the most commonly encountered slime molds is the yellow Physarum polycephalum, found both in nature in forests in temperate zones, as well as in classrooms and laboratories. Most slime molds are smaller than a few centimeters, but some species may reach sizes of up to several square meters and masses of up to 30 grams. Many have striking colours such as yellow, brown and white

spotted in a mix oaks,eucalypthus and pine trees forest,in the north limit of the weet meadow near my house.I know that Alex,spott one of these,so latter i'll go to his page to is this beauty.

Thanks Oscar for your nice words

What an amazing mess Antonio! Glad I found it. Good spotting friend.

Thanks very much Logan by your nice words,added to the http://www.projectnoah.org/missions/4357...

Superb! Feel free to add it to my global mission for slime molds. http://www.projectnoah.org/missions/4357...

Thanks Chun,these are one of my prefered too :-)

I upload one more photo(the last),it show's the last decay stage of the Slime mold

Thanks Arlanda,i'am going to see that :-)
Thanks Mayra

Very nice António, I found the same ones last week here in Madrid

Beautiful Antoio!!I am in India now! I saw a pretty bird on a peepal tree in my backyard( brothers home) I will put it up soon.

It is a beauty, Antonio.

Thanks Leuba,i know you will :-) i could not belived,i go again there tonigth to take more pictures,and i saw much more spread in a three rotes,some in a more advanced decay stage,i'll post them tomorrow,i edit this ,but no time for the other ,i'am happy :-)
Gilma i think is a fungus,but look's like caviar :-)

great spotting and photos Antonio! I hope I'll see one of these some day...