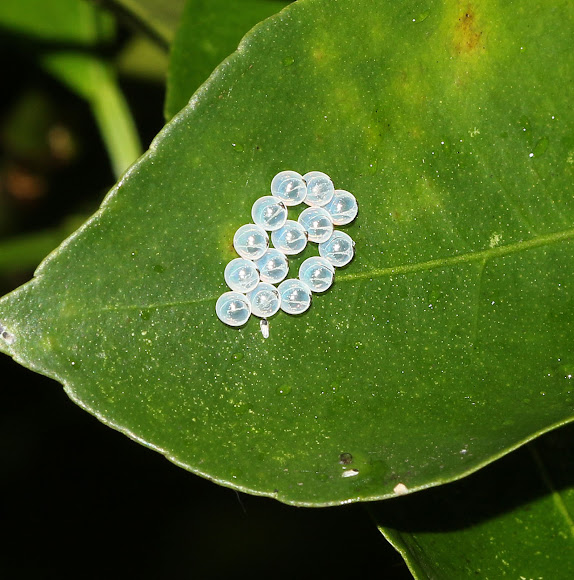 Rhynchocoris longirostris Stål, 1871. This Citrus Stink Bug belongs to the Hemipteran Family: Pentatomidae. The adults, in dorsal view, are pretty much all dark green with two black stripes running down the lighter green head. The wings tend to look brownish and then black when overlapping in the closed position. In ventral view they show a very light yellowish- green including the legs. They are quite impressive with their massive shoulder spikes, but the nymphs are much more colourful with yellow, black and white markings which change noticeably with each moult. In this area, They can be spotted, usually in great numbers, on citrus trees mostly during the rainy season. I believe that the species is considered a pest by citrus farmers, but as an enthusiastic bug hunter, I am always happy to see them. I don't mean to be frivolous because I know that they can be a serious problem.

The specimens shown here are R. longirostris First Instar nymphs, pictured on a Citrus sp. in our garden. I spotted the eggs at 7:37 a.m. one morning and didn't know how long they had been there (and was not entirely sure that they were R. longirostris). So I decided to keep an eye on them and check for any developments. Obviously, I was not sufficiently attentive because when I returned about 2 hours later, they had all hatched out. However, I did have the pleasure of observing them for a couple of days until they completely dispersed throughout the leaves and fruits of the four citrus trees in the garden. There were many nymphs of various instars present so I completely lost track of the original 14 hatchlings pictured here.

John B. 3 months ago

Thank you, SukanyaDatta. Your comments are much appreciated.