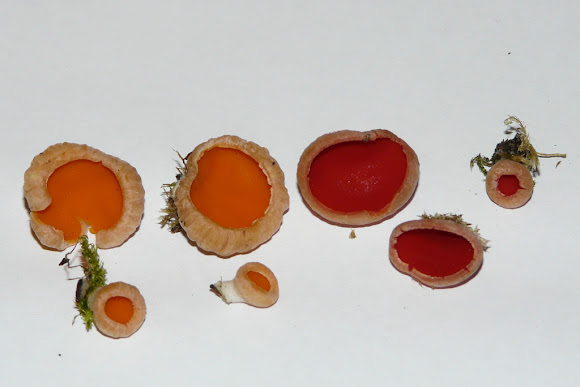 the same as this spotting: http://www.projectnoah.org/spottings/183... Growing on deciduous sticks. On Dec 10 the biggest were about 1.5-2cm across and smallest were about 0.5cm across. In Feb the biggest was about 4cm. I'll probably need to sequence the DNA to get an ID for this one. S. coccinea is an edible species. I fried these ones up on three different occasions and I'm still ok. Sarcoscypha coccinea var. aurantiaca? Sarcoscypha dudleyi? Aleuria aurantia? Sarcoscypha austriaca? S. austriaca var. lutea This thread suggests this would need a microscope and a fresh specimen to get a positive ID: http://www.wildaboutbritain.co.uk/forums... According to someone in the thread S. coccinea has straight microscopic hairs on the cup surface whilst S. austriaca has curly ones. S. austriaca var. lutea has only one record in the UK on NBN Gateway http://www.wildaboutbritain.co.uk/forums...