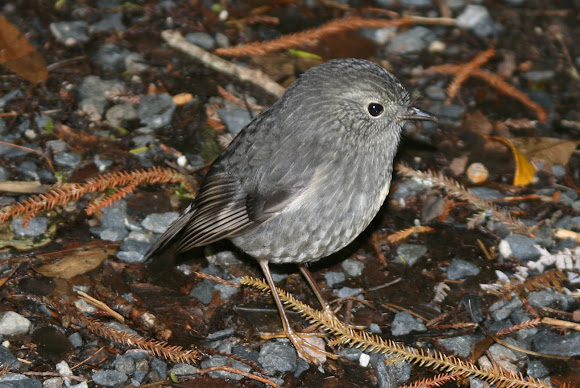 A species of Australisian Robin, endemic to NZ (South Island Robin and Stewart Island Robin) Around 18cm in length and weighing about 35g, on impossibly thin legs (photo 3), juveniles and females of the species exhibit light-dark grey mottle plummage, with a distinctive creamy patch on the lower chest. Most males become darker, to almost black, by their third annual moult. Difficult to say whether this bird is juvenile or female. Completely fearless, they will readily approach humans, especially if you scratch the soil for them to improve access to bugs! Their call is reminiscent of their Maori name, Toutouwai, and is a very distinctive call clearly carried through the bush. It is genearlly

They are native to the mature temperate rainforests of NZ and occupy the ground and lower canopy of this environment, feeding mainly on invertebrates but also fruit in summer and autumn. They will also cache food for dry times. A breeding pair are strongly territorial and will occupy bewenn 0.2-5.0ha depending on the health of the local ecology. This one was seen on the circular walk around Lake Rotopounamu in NZ central North Island, well worth a visit if you're in the area - plenty of other native birds as well.

While common in some forest areas, it is notably absent from other suitable habitat. Females do all of the egg incubation so predation by introduced mammalian species has a huge impact on the viability of populations. Where predator control is being carried out, these birds can frequently be seen

Fabulous spotting. What a sweetie. Thanks.

Great series Rach, Thanks for sharing this with us.