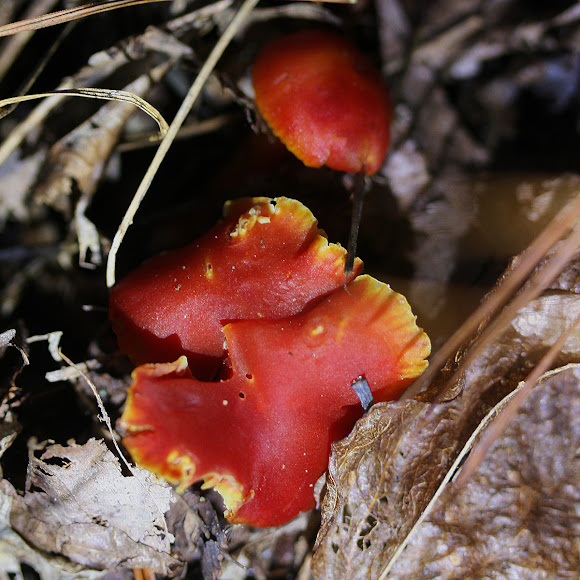 Brightly colored mushrooms with moist pilei (caps). Pilei vary with age. Younger specimens are ovate and colored scarlet red with orange undertones. The edges are yellow to orange. Older specimens are more plane shaped (some with wavy edges). Some of the older specimens are colored red with orange edges while others have faded to yellow or are orange (centrally). Gills of all specimens are pink with yellow to orange edges, are slightly decurrent, and have lamellulae (alternating short and long gills). Stipes are smooth, colored dark orange to pale yellow (near base), and leave a slightly oily residue when handled. Spore print is white. Gliophorus species were once considered a part of the genus Hygrocybe, but recent genetic analysis separates them into their on distinct genus. Gliophorus species typically have slimy or glutinous caps and stems. This is a first time spotting on Project Noah.

Growing in moss/leaf litter on a slope in dense mixed hardwood/pine forest in Northwest Georgia.

I just spotted some of these for the first time today! I was so impressed with the color

Thank you, Christine! This genus never fails to impress me with its bright colors! <3