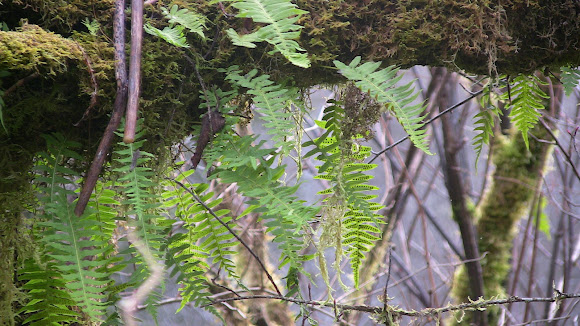 Green ferns, under a foot in length, grows in clusters, usually hanging off trees or rocks.

" It thrives in a humid climate, prevailing in areas with cool and moist summers and warm and wet winters. It can often be found growing on the trunks and branches of deciduous trees, particularly bigleaf maple, but is also often found on rocks, logs, and wet, mossy humus. Habitat elevation is lowlands below 600 meters."

"Polypodium glycyrrhiza, commonly known as licorice fern, many-footed fern, and sweet root, is an evergreen fern native to western North America, primarily in a narrow strip in southern Alaska, southwestern Yukon Territory, western British Columbia, Washington, Oregon, and California, though two highly disjunct populations are known from Idaho and Arizona. Licorice fern acquires its name from its licorice-flavored rhizome, which was chewed for flavor by numerous Native American groups, including the Sḵwx̱wú7mesh, Shishalh, Comox, Nuxalk, Haida, and Kwakwaka'wakw. The rhizomes were also usually used medicinally as a treatment for the cold and sore throats."

So brave! Please definitely let me know how it tastes like!

Thank you! Yeah, they look very pretty hanging from trees. One of these days I might be brave and try to taste the rhizomes.

My first thought: "Oh! I've seen this a lot in my area, too!" Then I realized we're from the same state! I think that licorice ferns are beautiful and make nice decorations for trees. :-) Great information, too!