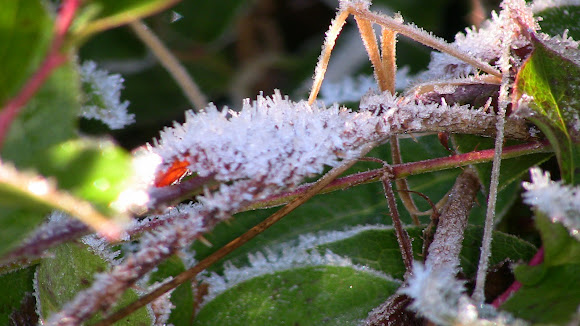 I have to admit it, I took this picture more because of the beautiful frost on the leaves than the plant itself; but it's nice to be reminded of the evergreen beauty that can be found in wintertime. "Gaultheria shallon is 0.2 to 5 metres (0.66 to 16 ft) tall, sprawling to erect. Evergreen, its thick, tough, egg-shaped leaves are shiny and dark green on the upper surface, and rough and lighter green on the lower. Each finely and sharply serrate leaf is 5 to 10 centimetres (2.0 to 3.9 in) long. The inflorescence consists of a bra raceme, one-sided, with 5 to 15 flowers at the ends of branches. Each flower is composed of a deeply five-parted glandular-haired calyx and an urn-shaped pink to white, glandular to hairy, five-lobed corolla, 7 to 10 millimetres (0.28 to 0.39 in) long. The reddish to blue, rough-surfaced, hairy, nearly spherical fruit is 6 to 10 millimetres (0.24 to 0.39 in) in diameter."

"Native to western North America: Gaultheria shallon is tolerant of both sunny and shady conditions at low to moderate elevations. It is a common coniferous forest understory species and may dominate large areas. In coastal areas, it may form dense, nearly impenetrable thickets. It grows as far north as Baranof Island, Alaska."

"Its dark blue "berries" (actually swollen sepals)[1] and young leaves are both edible and are efficient appetite suppressants, both with a unique flavor. Gaultheria shallon berries were a significant food resource for native people, who both ate them fresh and dried them into cakes. They were also used as a sweetener, and the Haida used them to thicken salmon eggs. The leaves of the plant were also sometimes used to flavor fish soup. More recently, Gaultheria shallon berries are used locally in jams, preserves and pies. They are often combined with Oregon-grape because the tartness of the latter is partially masked by the mild sweetness of Gaultheria shallon. Gaultheria shallon has been used for its medicinal properties by local natives for generations. The medicinal uses of this plant are not widely known or used. However, the leaves have an astringent effect, making it an effective anti-inflammatory and anti-cramping herb. By preparing the leaves in a tea or tincture one can take the herb safely to decrease internal inflammation such as bladder inflammation, stomach or duodenal ulcers, heartburn, indigestion, sinus inflammation, diarrhea, moderate fever, inflamed / irritated throat, and menstrual cramps. A poultice of the leaf can be used externally to ease discomfort from insect bites and stings."