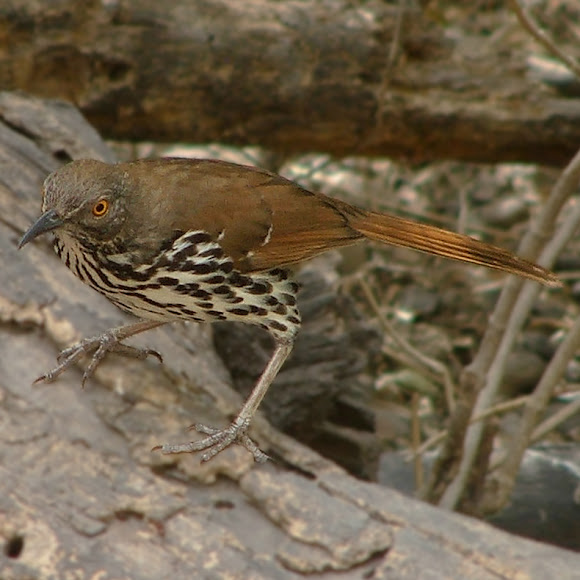 The curve-billed thrasher generally measures 25 to 28 cm (10 to 11 in) long, and is immediately recognized as a thrasher by its long tail and short wings.[5] It is also recognized for its sickle-shaped bill, almost as long as its head width and brownish black in color. The body is compact with a large head, short wings and long tail. However, the tail is short relative to other thrasher species.[2] The chest is grayish brown with circular brown-gray spots.[5] The eyes are generally orange, shading to golden in adulthood.[2] Juveniles are lacking in pale tips, retrices, abdominal feathers are unkempt and upper parts and chest are washed rufously.[5] — Wikipedia

The curve-billed thrasher is commonly found throughout the southwestern United States from Arizona's Sonoran Desert across New Mexico to west Texas, southeastern Colorado and southwestern Kansas as well as most of Mexico from the Sonoran-Chihuahuan Deserts and south through the Mexican Plateau into Central Tamaulipas, inland to Oaxaca, and on the coast of Sonora to Nayarit.[2][5] Vagrants have been found in bordering states of its range, as far north as North Dakota, Alberta and Manitoba and as far east as Florida.[5] Palmeri types have been spotted in Florida, while curvirostre have been found in Iowa on several occasions.[5] — Wikipedia