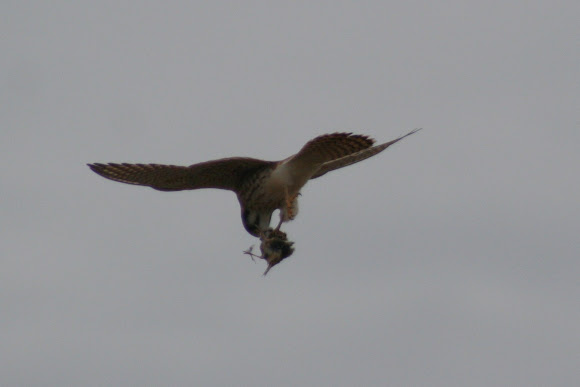 Size & Shape The slender American Kestrel is roughly the size and shape of a Mourning Dove, although it has a larger head; longer, narrow wings; and long, square-tipped tail. In flight, the wings are often bent and the wingtips swept back. Color Pattern American Kestrels are pale when seen from below and warm, rusty brown spotted with black above, with a black band near the tip of the tail. Males have slate-blue wings; females’ wings are reddish brown. Both sexes have pairs of black vertical slashes on the sides of their pale faces—sometimes called a “mustache” and a “sideburn."

American Kestrels occupy habitats ranging from deserts and grasslands to alpine meadows. You’re most likely to see them perching on telephone wires along roadsides, in open country with short vegetation and few trees.

Ava, He caught the little thing right as it jumped off the power line

Wow! Did you see it catch that poor little bird in flight?