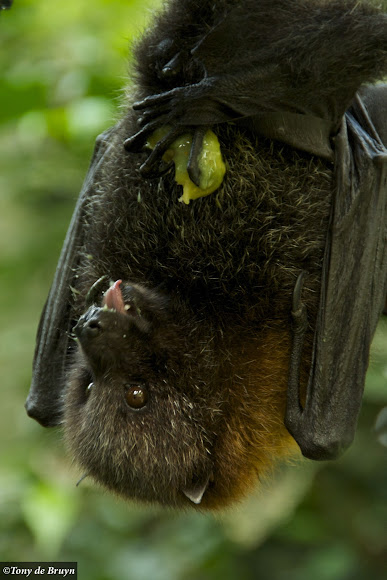 Island of Rodriguez, a part of Mauritius located in the southern Indian Ocean east of Madagascar. Dense rainforests with large, mature trees.

It is threatened by habitat loss through storm damage and human intervention and also by local hunting for food. Formerly the daytime roosts or 'camps' of this flying fox contained more than 500 individuals. The species currently numbers just a few hundred in the wild and is classified as critically endangered by the IUCN. The Durrell Wildlife Conservation Trust has undertaken a successful captive breeding program and there are now colonies in several zoos. Likewise, the Organization for Bat Conservation is funding an international conservation project. Pictures taken at Artis, zoo of Amsterdam.

Thank you Thom! They really are beautiful!

Thank you Emilie! When I took these pictures I had no idea that they were so rare, even in captivity.