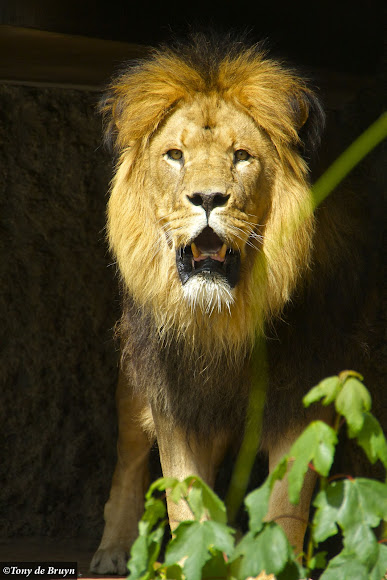 The lion is the tallest (at the shoulder) of all living cats, averaging about 14 cm (5.5 in) taller than the tiger. Behind only the tiger, the lion is the second largest living felid in length and weight. Its skull is very similar to that of the tiger, although the frontal region is usually more depressed and flattened, with a slightly shorter postorbital region. The lion's skull has broader nasal openings than the tiger. However, due to the amount of skull variation in the two species, usually, only the structure of the lower jaw can be used as a reliable indicator of species. Lion coloration varies from light buff to yellowish, reddish, or dark ochraceous brown. The underparts are generally lighter and the tail tuft is black. Lion cubs are born with brown rosettes (spots) on their body, rather like those of a leopard. Although these fade as lions reach adulthood, faint spots often may still be seen on the legs and underparts, particularly on lionesses. Picture taken at Artis, zoo of Amsterdam

Thank you Thom and Kranti!

Thank you Ca! It is one of the most beautiful lions I have ever seen. Not only is he a beauty, he stands like a true lion should. True the years he already had a lot of offspring. This in one of he's lionesses http://www.projectnoah.org/spottings/168...

He was, thank you Sophie!

He was a good model, Tanks Karen!