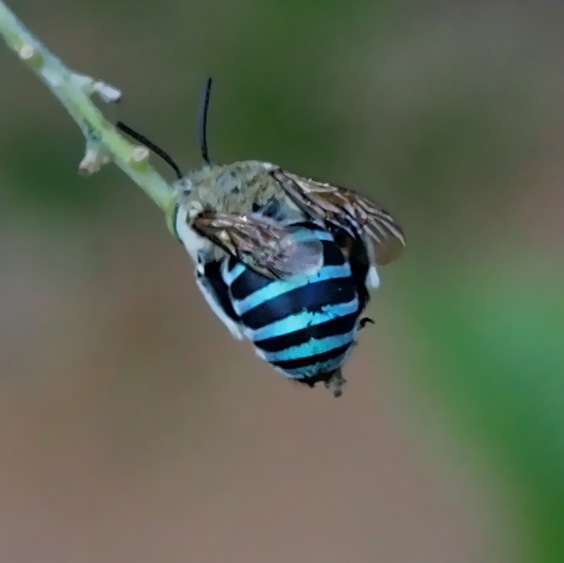 Amegilla cingulata, commonly known as the blue banded bee, is an Australian native bee. It belongs to the Anthophoridae family of insects. Currently, there are several scientific organisations conducting thorough research on how the blue banded bee benefits agriculture through its distinctive "buzz pollination". These bees are very important for the production of food. A. cingulata has a very striking appearance. Unlike the honey bee, it has pale blue stripes on its abdomen instead of yellow. The male can be distinguished by the number of complete bands, having five as opposed to the females' four. In size, A. cingulata can grow to 10–12 millimetres (0.39–0.47 in). Its appearance includes a golden brown head with bulging eyes that have multiple lenses. They have six sticky legs and a long tongue to help extract nectar from flowers. Scientists believe that male bees have brighter blue stripes to attract female bees.

Getting closer to getting a good photo of this Blue-banded Bee that lives in my garden!

These also hang around my condo but I have yet to take a photo of them- if I do it'll just be a blur. My only hope is to capture one pollinating.

@outdooreducation29, You'll just have to come to India! Or Australia! to see this bee...

thanks maria, Ali and KarinL...

So this must be a male.
Nice pajamas.

@Satyen, Just need to find another angle, so we can see the eyes...!