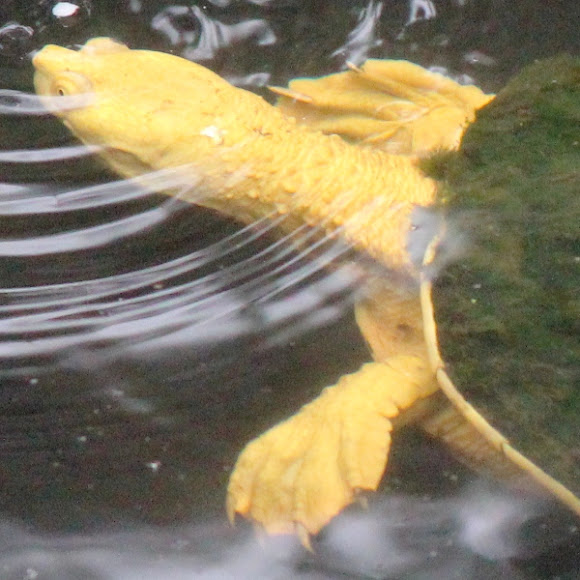 This appears to be an albino or leucistic Murray River Turtle (fully grown adult male). I can't see what colour the shell is as it is covered in green algae. I saw this freshwater turtle at the Warrawong Wildlife Sanctuary in the Adelaide Hills in company with a bunch of other Murray River Turtles (see shot 5 in this series for some 'normal' ones).

The algae on the shell gives some camouflage

Thanks Leanne, it was a really cool spot. It was actually selected by National Geographic as their Project Noah Spotting of the Week on 30 Dec, I was so so excited!! https://www.facebook.com/natgeo

Thanks Wayne. No, I didn't use a filter. I have been thinking about getting a polariser filter though!

Great shots! Did you use a polarizer filter on your lens?

What a spotting, Shanna - thanks for sharing and Congratulations on the SOTW. Well done and well deserved !!

Thanks Argy, I don't think it's popped up on here yet. I am still in absolute shock!!!!

Congrats Shanna! This one sneaked past me. Well deserved SOTW.