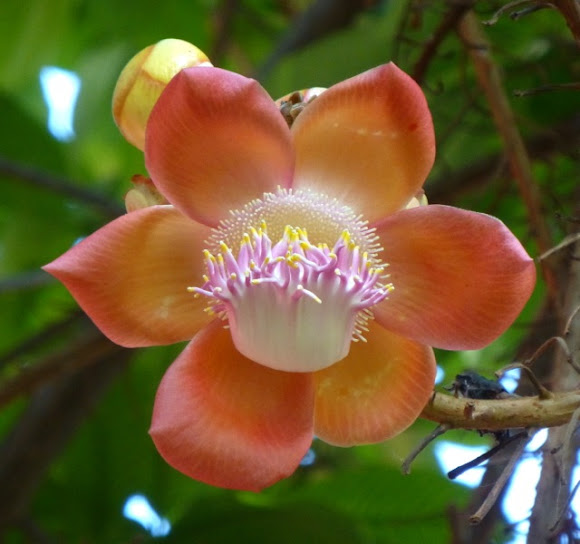 Couroupita guianensis, whose common names include Ayahuma and the Cannonball Tree, is an evergreen tree allied to the Brazil nut (Bertholletia excelsa), and is native to tropical northern South America and to the southern Caribbean. In India it has been growing for the past two or three thousand years at least, as attested by textual records, hence it is possible that it is native to India also. It's rare, but also found in Bangladesh. It is known as নাগকেশর(Nagakeshar) or নাগালিংগম(Nagalingam) in Bengali. It's part of the family Lecythidaceae and grows up to 25 m (82 ft) in height. The "Cannonball Tree" is so called because of its brown cannon-ball-like fruits. The majority of these trees outside their natural environment have been planted as a botanical curiosity, as they grow very large, distinctive flowers. Its flowers are orange, scarlet and pink in color, and form large bunches measuring up to 3m in length. They produce large spherical and woody fruits ranging from 15 to 24 cm in diameter, containing up to 200 or 300 seeds a piece. Both the fruit and the flower grow from stalks which sprout from the trunk of the tree. Cannonball Tree flowers are found on thick tangled extrusions that grow on the trunk of the tree; these are found just below the foliage branches, and right down to just above ground level. The extrusions however, can range from two to six feet in length.

An old tree, planted in my garden in Tamil Nadu, India. The Cannonball Tree is native to the tropical forests of northeastern South America, especially the Amazon Basin and in the tropics such as in India and Thailand.

The trees are grown extensively in Shiva temples in India. In Hindi it is called Shiv Kamal and also known as "Kailaspati". It is called the Nagalingam tree in Tamil. The flowers are called Shivalinga flowers in Hindi; Nagalinga Pushpa in Kannada; Nagamalli flowers or Mallikarjuna flowers in Telugu. Hindus revere it as a sacred tree because the petals of the flower resemble the hood of the Naga, a sacred snake, protecting a Shiva Lingam, the stigma. The Cannonball Tree possesses antibiotic, antifungal, antiseptic and analgesic qualities. The trees are used to cure colds and stomach aches. Juice made from the leaves is used to cure skin diseases, and shamans of South America have even used tree parts for treating malaria. The inside of the fruit can disinfect wounds. The fruit emits an unpleasant odor and can be used as an insect repelent just by rubbing it to the skin or clothes.

Beautiful pictures and very interesting. Thank you very much for sharing.