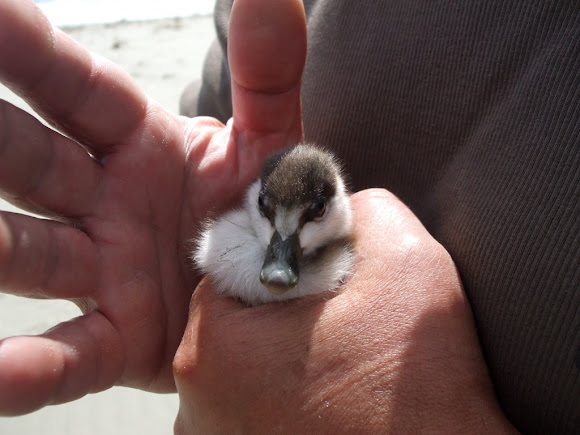 A Paradise Shelduck duckling, found drifting from the Estuary to the sea, near the Shag Rock, Sumner, Christchurch. The seagulls were attacking it, and I gave it the chase of it's life, trying to keep it away from the sea and the attacking seagulls, and finally with the help of a very polite lady and her little son, Ryan, we managed to catch it and I took it home with me (because I was all wet, due to the battle with the waves), before we handed it on to a wild animal/bird rescue clinic, where they kept it along with other little ducklings of it's species. We named the duckling Ryan, and we called the whole mission, "Saving duckling Ryan" :)

In the 1st pic, my husband holds the duckling, for the pic...We always have a small cardboard box ib the car, in case we find an animal needing help...

I used to raise baby hedgehogs in Greece (where they are protected), and I continued in raising them here too ( in NZ they are considered a pest species). I worked as a wildlife volunteer for 8 years in Greece, mostly with birds of all kinds and hedgehogs, among other small mammals, and for the last 4 years in NZ, only with hedgehogs...
Bigger mammals in Greece (like bears and wolfs), marine mammals and sea turtles, go to specialised wildlife centers, designated for their species...
It's a bit complicated, but it still works OK, with the help of volunteer groups and individuals...

Great save, Despina! Do you rescue and rehabilitate mammals regularly? My husband does reptiles and amphibians.

I am not really familiar with duckling raising, I am specialised in small mammals. I believe Ryan did very well, and I am sure he was released succesfully :)

Beautiful story, Despina! I used to raise ducklings in my childhood. I keep fond memories of this. They made excellent pets. I hope he can be released safely once he grows up :-)

Dear @SatyenM, I had 2 great helpers, who assisted me during this mission...That's why we named the duckling, Ryan...To honor Ryan and his mom :)

@Jellyfishnebula, I wish I could raise him, but I am sure the people in the clinic, they did their best :)

Great job! Thanks for saving Ryan :-)