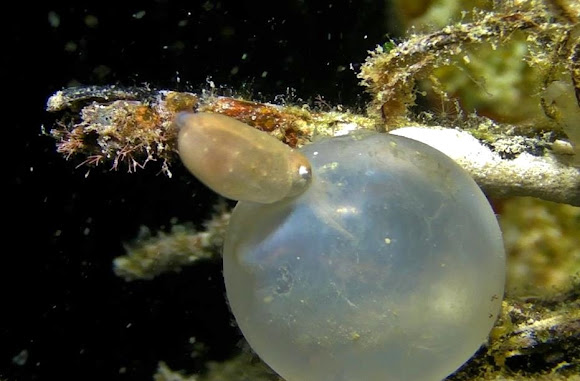 This is the moment of the hatching of a Pharaoh Cuttlefish. The Eggs are like table tennis balls, around 1-inch in diameter. When the baby cuttlefish are fully developed, they can be seen 'swimming' inside the egg and already able to change colors. They usually hatch at sunset where they are less vulnerable.

Cuttlefish lives in the shallows of the coral reefs. The Females lays their eggs by depositing them individually in the crevices among hard corals. In this particular dive site and Mabul Island, Malaysia in particular, there are lots of artificial reefs where lots of marine life has taken to as nurseries. In this particular instance, it was not the coral reef that the Cuttlefish lay their Eggs but rather the roots of a coconut tree that was planted on this particular dive site. Several big Pharaoh Cuttlefish can be seen throughout the day, with the Males courting the Females. I have been to Mabul Island several times and each time I go there, I would request to do a sunset dive at this dive site as I know there will be Pharaoh Cuttlefish and good chance of Eggs of various stages of development among the coconut tree roots. So, I just go around the coconut tree roots to look for the Eggs and identify those that are in advanced stage i.e. likely to hatch. This can be determined by seeing the embryo starting to swim freely inside the egg and also changing its colors. Sometimes, smaller embryos of smaller sizes can be seen but I know those are not ready to hatch as they still have the egg yolk sack attached. Once I found the Eggs that I believe are likely to hatch, its just a matter of waiting patiently for it :D. This picture was taken on the fourth hatching of the evening, sometimes, it happens very fast that you just missed the shot. I have explained to my friend joining me on the dive what we were looking for and he was also ready to take the picture :) Cuttlefish feeds mostly on crustaceans (shrimps and crabs) and sometimes fishes. They hunt by shooting a jet of water to uncover their prey in the sandy bottom and when the prey try to get away, the Cuttlefish open their eight arms/tentacles and shoot 2 long feeding tentacles to grab them. On the end of each of this 2 tentacles are suckers that grabs and pulls the prey towards its beak where it gets paralyzed by poison and then eaten.

The second picture was taken by a friend, of the same hatching.

Thanks, Kathleen, will update more info :)

HI Albert. Can you give us a bit more information on your spotting? Habitat, your personal experience with this event? thanks, I would like to nominate it for Spotting of the Week, but I need more information to do that!

This is an AMAZING spotting!!