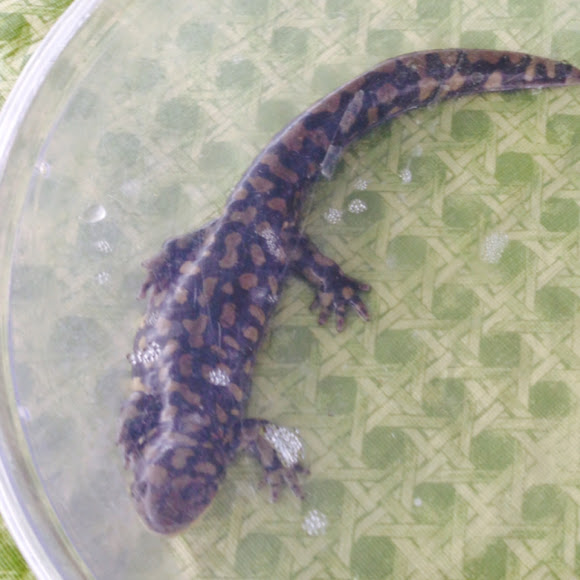 The tiger salamander is one of the largest terrestrial salamanders in the United States. The biggest specimen recorded was 13 inches long. The average size ranges between seven and eight inches. It is stocky with sturdy limbs and a long tail. The body color is dark brown, almost black, and irregularly marked with yellow to olive colored blotches. The only other salamander with which it might be confused is the smaller spotted salamander (Ambystoma maculatum). The spotted, however, has two rows of regular, yellow-to-orange spots running parallel down its back, as distinct from the irregularly distributed spots of the tiger salamander.

The eastern tiger salamander ranges along the east coast from southern New York to northern Florida, west from Ohio to Minnesota and southward through eastern Texas to the Gulf. Historically, Albany is cited as being the northernmost point of this species' range along the east coast. The only two specimens recorded (1835, 1836) from this area may in fact have been brought into the area accidentally via the Erie canal. The tiger salamander inhabits sandy pine barren areas with temporary or permanent pools for breeding. In New York,the tiger salamander is found only on Long Island with most of the known breeding colonies restricted to the central Pine Barrens. In the absence of natural pools or ponds, it may breed in man-made depressions filled with water.