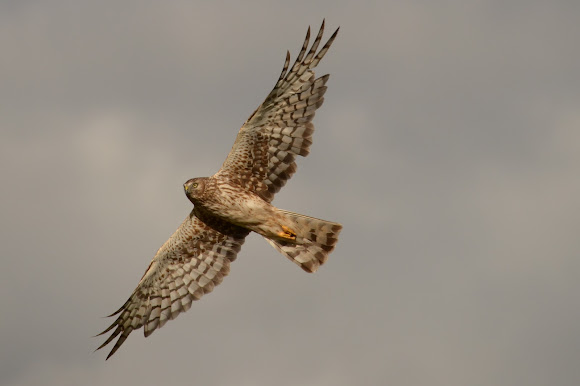 Over an large field of CREP grass growing alongside a low-maintenance dirt road, close to farm fields

I used to drive this low-maintenance dirt road looking for insects and tracks so I frequently would stop the car and walk a good length of road before moving my car up and stopping again on my search. This Hawk showed up one day while I was searching through the grasses growing along the ditch. I heard her long before I ever saw her and really had to search before seeing her. Eventually she came closer and I was able to get these shots. There's a large, solitary tree in the middle of this CREP field that she frequently flew back to alight upon. Search though I might, I was never able to see a nest or offspring but her occasional screeches led me to believe she was either guarding her nest or her territory, although I could be mistaken. She appeared to be hunting, perhaps looking for short-nosed shrews, voles, field mice or what have you (rodents) that we have in this area. I was hoping to capture her with a meal in her beak but I never did she watch she caught, further out in the field. While her screeches were a little intimidating, she never flew directly at me, bombed me or did anything else to threaten me in any way other than to sporadically give a loud screech. I found her there on a number of occasions but these were the best images I was able to get of her.

Yep a female, the males are all gray and white. Great shots!