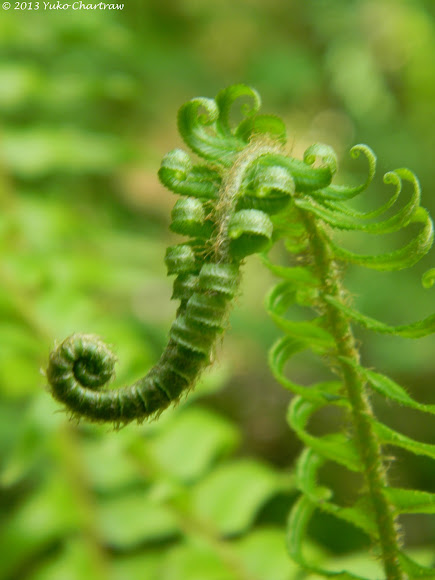 Polystichum munitum (Western Sword Fern) is an evergreen fern native to western North America, where it is one of the most abundant ferns occurring along the Pacific coast from southeast Alaska south to southern California, and also inland east to southeastern British Columbia, northern Idaho and western Montana, with isolated populations in interior northern British Columbia, the Black Hills in South Dakota, and on Guadalupe Island off Baja California. The dark green fronds of this fern grow to 50-180 cm (i.e. nearly 6 feet) tall, in a tight clump spreading out radially from a round base. They are single-pinnate, with the pinnate alternating on the stalk. Each pinnate is 1-15 cm long, with a small upward-pointing lobe at the base, and the edges are serrated with bristly tips. Individual fronds live for 1.5-2.5 years and remain attached to the rhizome after withering. The round sori occupy two rows on either side of the midrib of each pinna and are covered by a centrally-attached, umbrella-like indusium with fringed edges. They produce light yellow spores.

Moist forests at low to middle elevations. This one was spotted on the trail at Cougar Mountain (Issaquah Aples) in Renton, WA.

I was so fascinated by the shapes and forms that these ferns created. It was magical.

Thanks Dan! It's that time of year again when all the ferns curl out their leaves!

Very nice series--love all those curls!

Thanks for your comment Amanda! Yes, I think it's the young western sword fern. It was spotted in mid-May and they were just starting to curl out. The fronds (is that what it's called?) were still thin and tender. The color was much brighter green and they were just beautiful!

Beautiful! This must be young western sword fern? It looks like it's about to curl out and stretch its fronds.

Very nice series. I love it.