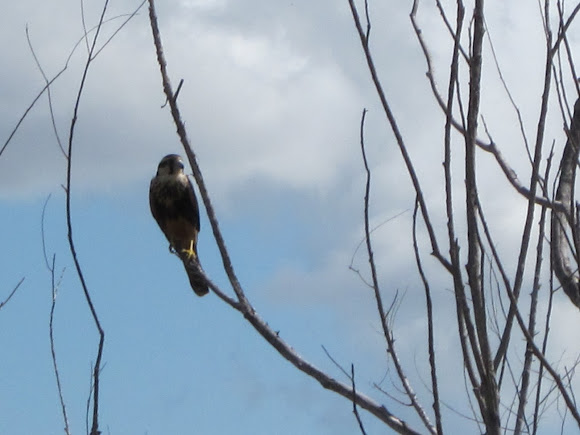 Mid-sized falcon, between a Kestrel and a Peregrine. They have really distinctive orange on their legs. This one was spotted on the mainland part of Aransas NWR. We've had a population (introduced) on Matagorda Island for a few years and every now and then we spot some that have gone exploring. Falcons dont create their own nests, and either steal pre-built nests (sometimes from hawks or caracaras) or nest in artificial structures.

Sitting in some brush/shrubs that border a dam. But typically they're found on grassy prairies.

Hey Christy, I added it to the mission you suggested. Thanks for that, I don't do much birding, so I hadn't joined that mission yet. It's a cool one though.

Very neat spotting!! I'd love you to add this spotting to the mission Raptors of North America: http://www.projectnoah.org/missions/8627...