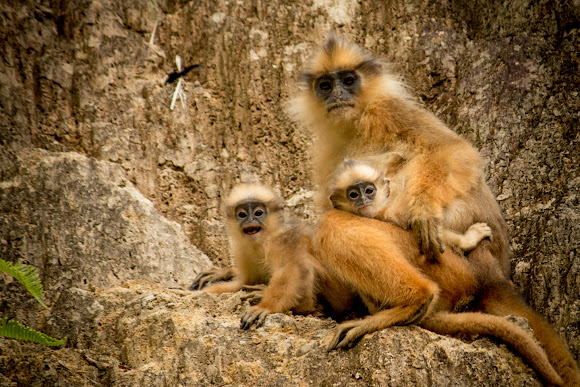 Seen on the road between Sungaipenuh and Tapan, which passes directly though the national park. They were crossing over a section of the road that has had frequent landslides, hence the lack of vegetation. In the third picture, which shows all four of the monkeys that I spotted, I believe that one on the furthest right may be the male, as he was the only one not carrying any young, and was somewhat larger than the others. Also, notice how the monkey in the 5th picture is holding a rock. Was she using it to dig? Picking insects out of it? Or just playing with it? I'm not sure.

Every part of Sumatra has a different subspecies of leaf monkey with varying coloration. 4 species and 21 subspecies throughout the island (according to the 1987 edition of The Ecology of Sumatra). http://i44.tinypic.com/343gbk7.jpg

Wonderful series of such a beautiful family!