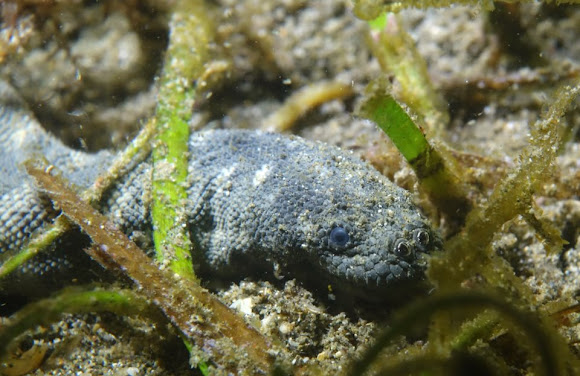 Enhydrina schistosa, commonly known as the beaked sea snake, hook-nosed sea snake, common sea snake, or the Valakadyn sea snake, is a highly venomous species of sea snake common throughout the tropical Indo-Pacific. This species is implicated in more than 50% of all bites caused by sea snakes, as well as the majority of envenomings and fatalities. The rostral scale is longer than broad, and is in contact with four shields; frontal more long than broad, shorter than the parietals; nasals in contact with the two anterior labials; sometimes partially divided; one pre- and one or two postoculars; temporals l–3; seven or eight upper labials, fourth or third and fourth entering the eye, the last sometimes divided; anterior chin-shields rather indistinct, separated. Scales with a tubercle or keel, in 50–70 rows; ventrals 230–314, slightly enlarged. The snake is usually uniformly dark grey above; sides and lower parts whitish.

It is found in the Arabian Sea and Persian Gulf (off Oman), south of the Seychelles and Madagascar, the seas off South Asia (Pakistan, India and Bangladesh), Southeast Asia (Myanmar (formerly Burma), Thailand, Vietnam).

The venom of this species is made up of highly potent neurotoxins and myotoxins. This widespread species is responsible for the vast majority of deaths from sea snake bites (up to 90% of all sea snake bites). The LD50 value is 0.1125 mg/kg based on toxicology studies. The average venom yield per bite is approximately 7.9–9.0 mg, while the lethal human dose is estimated to be 1.5 mg.

That is quite the snake