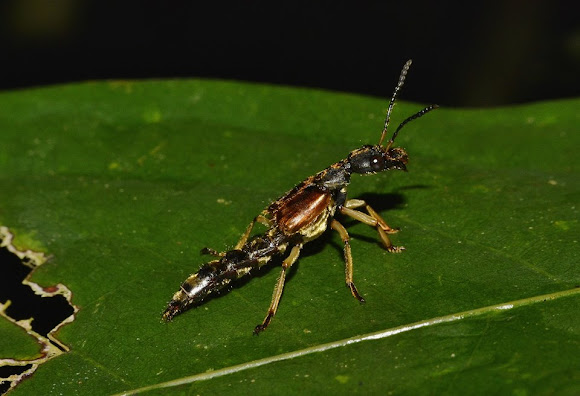 The rove beetles are a family (Staphylinidae) of beetles, primarily distinguished by their short elytra that leave more than half of their abdomens exposed. With approximately 58,000 species in thousands of genera, the group is currently recognized as the largest family of beetles. It is an ancient group, with fossil rove beetles known from the Triassic, 200 million years ago, and possibly even earlier if the genus Leehermania proves to be a member of this family. They are an ecologically and morphologically diverse group of beetles, and commonly encountered in terrestrial ecosystems. As might be expected for such a large family, there is considerable variation among the species. Sizes range from <1 to 35 mm (1.5 inches), with most in the 2–8 mm range, and the form is generally elongate, with some rove beetles being ovoid in shape. Colors range from yellow to reddish-brown to brown to black. The antennae are usually 11 segmented and filiform, with moderate clubbing in some genera. The abdomen may be very long and flexible, and some rove beetles superficially resemble earwigs.

Some members of Paederina (specifically the genus Paederus), a subtribe of Paederinae, contain a potent vesicant in their haemolymph which can produce a skin irritation called dermatitis linearis. which in English has unfortunately acquired the inaccurate name Paederus dermatitis. The irritant pederin is highly toxic, more potent than cobra venom. New Organism to Project Noah