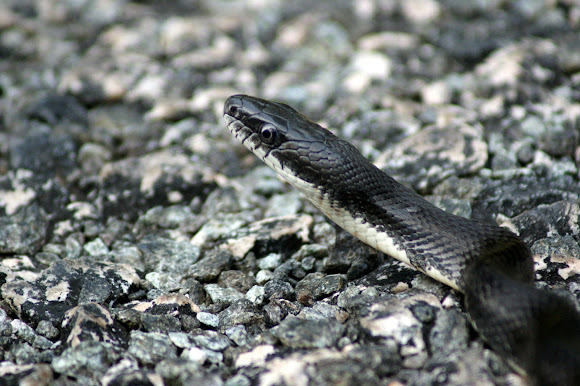 Adult rat snakes are typically 3-5 ft (91-152 cm), but large individuals may be more than 6 ft (183 cm) long. The appearance of rat snakes varies greatly throughout the geographic range. Black rat snakes are more northern in distribution and are characteristically black on top with a faint hint of white between some of the scales.

Rat snakes occupy a wide variety of habitats including rocky timbered hills, hardwood forests, river floodplains and swamp margins. They are commonly found in abandoned buildings and barns and are often the most common large snake in suburban areas.In Georgia and South Carolina, black rat snakes are found in the mountains and Piedmont regions of central Georgia and South Carolina. This one was photographed while crossing a gravel road at Landsford Canal State Park near Lancaster, SC.

Adult rat snakes primarily eat mice, rats, squirrels, and birds, as well as bird eggs. They are a common predator on wood duck eggs. Juveniles eat small frogs, lizards, and small rodents. Rat snakes are constrictors, and adept climbers that can scale brick walls as well as tree trunks. When frightened they often assume a “kinked” posture and remain motionless. They will vibrate the tail and expel malodorous musk.