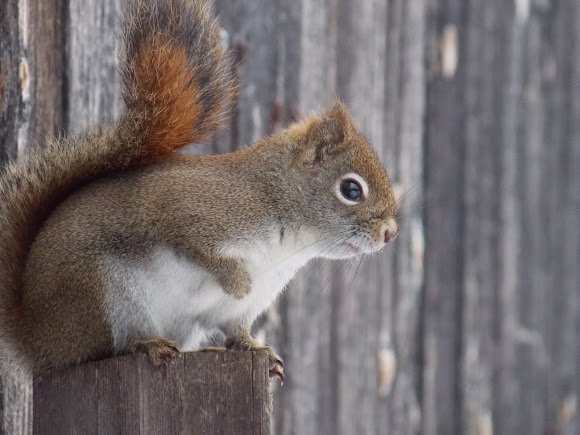 Red squirrels can be easily identified from other North American tree squirrels by their smaller size, territorial behavior and reddish fur with a white venter (underbelly). Red squirrels are somewhat larger than chipmunks. The Douglas squirrel is morphologically similar to the American red squirrels, but has a rust-colored venter and is restricted to the southwestern coast of British Columbia and in the Pacific Northwest of the United States. These species' ranges do not overlap.

He is hiding from the camra

I loved the video. Everybody seemed to get plenty to snack on. What an adorable squirrel!

I think I saw one today in my woods. I first thought it was a large Chipmunk and then saw it was a squirrel and it was making squeaking sounds like in your video and it had a white tummy and red tail. So adorable!

Very cute! I didn't know there was no squirrels in Australia! I thought there were always some species of squirrels everywhere on earth. We certainly learn something new every day on PN!

No Fyn, no Squirrels in Australia :(

Nice shot and video Fyn! Squirrels are only found in the Americas, Eurasia, and Africa, and not in Australia (apart from some introduced ones). Mind you , that's a pretty wide distribution for a family!

Thanks RiekoS, Sachin Zaveri, Ali Hemati Pour!!! Leanne, you've never heard a squirrel? You don't have any in Australia? Thanks!

Oh he's so cute! Lovely photo Fyn & I liked your video too. That's the first time I've ever heard a Squirrel!