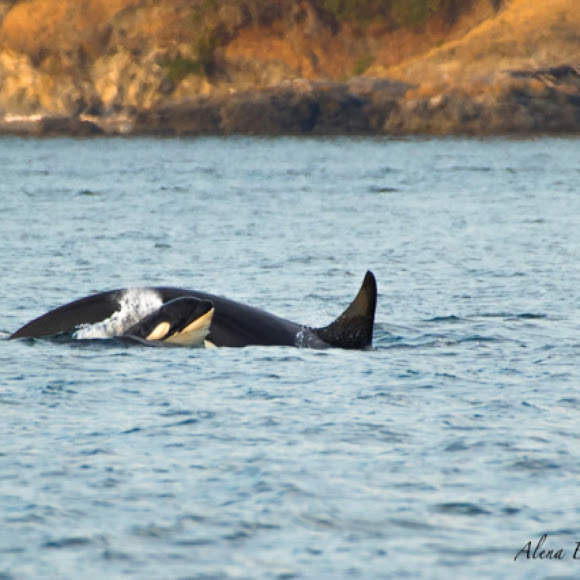 There was an exciting baby boom for the Southern Resident Orca Whales this year... 4 new calves!

3 new additions were born into the J-Pod this year, and 1 into L-Pod (baby pictured here is from J-Pod). This news is especially exciting because of the hard times the Southern Residents have been facing in recent years (even decades). The Southern Resident Orcas are endangered, fish-eating orcas rather than their mammal-eating cousins, the Transient Orcas. Their primary food source, Chinook Salmon (a.k.a. King Salmon), has declined significantly over the past decades (some say they are down to as low as 5% of their historical population). This means that Southern Residents are quite literally starving. A pregnant female whale from the J-Pod died tragically this past year when almost full-term. The necropsy stated that the female was starving to death. The Southern Resident Orcas, in an effort to compensate for the declining salmon stocks, have been changing their behaviour and feeding patterns in the past few years. They have been seen travelling in smaller groups and on different routes, potentially because there are no longer enough salmon in any one place to feed larger pods. Ocean pollution and noise also present significant risks to both Resident and Transient Orca Communities. Increased tanker traffic and the addition of several large oil pipelines on the coast are adding putting these orca populations, and the entire coastal ecosystem, at risk. This includes the highly controversial, recently approved Enbridge Northern Gateway Pipeline that will bring raw bitumen oil through the Great Bear Rainforest of British Columbia on supertankers. Please educate yourself about Southern Resident Orca Whales, Chinook Salmon declines, and big oil on the coast. I have posted links to some great resources at the bottom of this post. Thanks for listening, and for caring about our oceans and our orcas! LINKS FOR FURTHER INFO: - Center for Whale Research: http://www.whaleresearch.com/ - Raincoast Conservation Foundation: http://www.raincoast.org/projects/marine... - Orca Network: http://www.orcanetwork.org/Main/index.ph... Connect with me: Facebook: facebook.com/alenasphotography Twitter: twitter.com/AlenaESPhoto Website: www.alenaesphotography.com