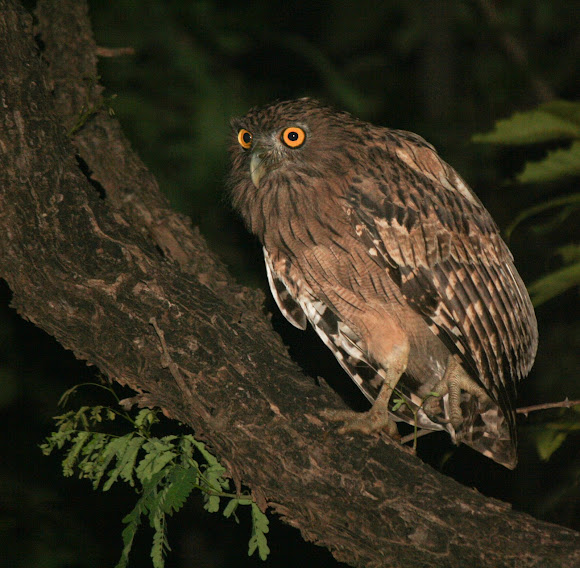 Photograped this beauty at midnight in Gir National park...This species is very nocturnal but it can often be located by the small birds that mob it while it is roosting in a tree. However, in some areas it may be semi-diurnal and has been seen hunting during daytime, especially in cloudy weather. Brown fish owl primarily hunt by stationing itself on a rock overhang or hanging perch over water, or by wading into shallow waters. It grabs food by gliding over the water, nearly skimming it with its feet and grabbing its prey by quickly extending its long legs. It feeds mainly on fishes, frogs and aquatic crustaceans, especially Potamon crabs.

The typical habitat of brown fish owls is forest and woodland bordering streams, lakes or rice fields. It inhabits mainly the lowlands, from open woodland to dense forest as well as in plantations; in the Himalayas foothills it ranges into submontane forest up to 1,500 m (4,900 ft) ASL or so but not higher.

Please add in this mission too -

Congrats Ashutosh for the SOTD!

Thank you Lisa and PN team :)

Congratulations Ashutosh Dudhatra! We just love this amazing photo so much, we featured it as our Spot of the Day!

Thank you Leanne and Alejandra.

Thank you Payal and Leuba...

Look at those eyes !! Nice spotting Ashutosh and thanks for the information as well.