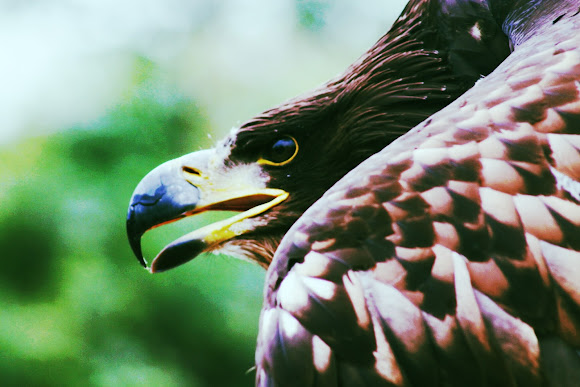 The Golden Eagle (Aquila chrysaetos) is a species of large birds of prey of the family Accipitridae. This bird is dark brown with a golden-brown plumage on the head and neck. The eagle uses his agility, his speed and extremely powerful talons to catch prey: rabbits, marmots, squirrels, and large mammals such as foxes, wild and domestic cats, mountain goats youth of young ibex, and young deer. It also eats carrion if prey is scarce, and reptiles. Birds, including large species like swans or cranes, crows and Gulls have all been reported as potential prey. The eagle defends a territory of up to 155 square kilometers. It is monogamous and a pair may stay together for several years or for life. They nest high up in the cliffs, trees, or human structures such as telephone poles. They build huge nests to which they may return for several years. Females lay one to four eggs, and both parents convent for 40 to 45 days. Often only one or two young survive to fledging, at the age of three months. Having once Holarctic distribution range, it has disappeared from many of the most densely populated. Although locally extinct or rare species is still quite common in Eurasia, North America and parts of Africa. The species has the highest density of nesting in southern Alameda County, California. The Eurasian subspecies is used to hunt and kill wolves in many native communities, where the bird is regarded with great mystic. This eagle is protected in several countries since the 1970s