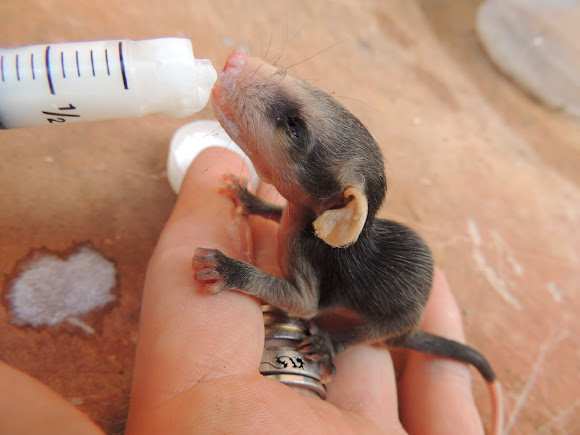 "White-Eared Opossum" is an omnivorous species. During fecal analysis, scientists found invertebrates in their diet. The invertebrates consisted mainly of insects. Fruits, seeds, and vertebrates were also found to be a part of the diet of these animals.

Encountered in a wide variety of habitats, on plains, marshes, grasslands, marginal and rain forests at high altitudes and at subtropical latitudes. Tolerates areas next to cultivation, cultivated lands, and deforested zones. In the Caatinga, they are found in zones of high and low chaparral and thorny vegetation, and in dísturbed areas.

I found this specimen on the floor of boatshop of my grandfather. As I could not find the mother or her "nest", I'm taking care of him temporarily by feeding with a mixture of powdered milk with bananas and earthworms. -I changed its food to: "Powdered milk mixed with eggs, honey, salt, banana, and, earthworm". (It's more recommended). I've changed the syringe by a Pasteur Pipette of silicone, and, a Zoologist helped me prepare the food... And when its old, I'll release it in the wild after teaching its fetch food.-

good work leonardo; great photo and thanks for helping him/her ;)

Awesome stuff. An excellent series, Leonardo, and good luck to this little guy.

Great spotting such a big head for such a little man...

AMAZING PHOTO. thank you for sharing

Very cute animal. Thanks for sharing

This is so beautiful. Congratulations on your SOTD Leonardo & great job :)

What a touching SOTD! Thanks for your fantastic work, and keep us updated! Congratulations on the SOTD, too!

Quite possibly the cutest SOTD. Congrats!

Well it's definitely a very uncommon name, for a girl :))

Oh it's a baby girl! How will you call her?
(I always name the animals I raise :D)

Thanks for the update Leonardo & good luck!

Thanks for all people again... Just to info: I've changed the syringe by a Pasteur Pipette of silicone, and, a Zoologist helped me prepare the food... And when its old, I'll release it in the wild after teaching its fetch food. ;)
(And its a female!)

Good luck and let us see it grow!

What a cute little baby...Well done dear @LeonardoMB, so glad you found it :)

Thanks alllll the people! And, just to inform, I changed its food to: "Milk powder mixed with egg, honey, salt, banana, and, earthworm". (It's more recommended)