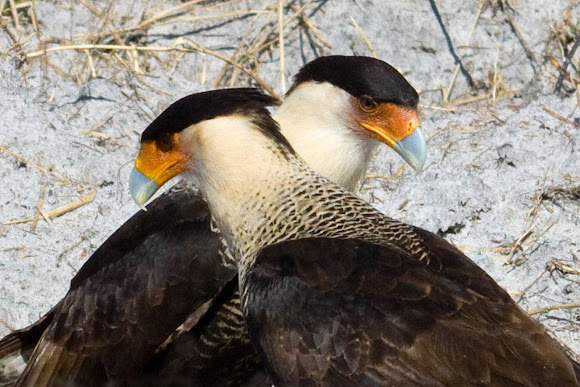 The Northern Caracara has a length of 49–58 cm (19–23 in), a wingspan of 107–130 cm (42–51 in), and weighs 800–1,300 g (1.8–2.9 lb).[7] Among caracaras, it is second in size only to the Southern Caracara.[8] A broad-winged and long-tailed, it also has long legs and frequently walks and runs on the ground. It is very cross-shaped in flight. The adult has a black body, wings, crest and crown. The neck, rump, and conspicuous wing patches are white, and the tail is white with black barring and a broad terminal band. The breast is white, finely barred with black. The bill is thick, grey and hooked, and the legs are yellow. The cere and facial skin are deep yellow to orange-red depending on age and mood. Sexes are similar, but immature birds are browner, have a buff neck and throat, a pale breast streaked/mottled with brown, greyish-white legs and greyish or dull pinkish-purple facial skin and cere. The voice of this species is a low rattle.

Northern Caracaras inhabit various types of open and semi-open country. They typically in lowlands but can live to mid-elevation in the Northern Andes. The species is often commonest in cattle ranches with scattered trees, shelterbelts and small woods, as long as there is somewhat limited human presences. They can also be found in other varieties of agricultural land, as well as prairies, coastal woodlands (including mangroves), coconuts plantations, scrub along beach dunes and open uplands.

I photographed this pair feeding on roadkill south of Myakka River State Park in Florida.

Thank you for all the nice comments.

Beautiful images of one of my favorite birds in Florida!

Thank you for the compliments.

The second photo is fantastic.