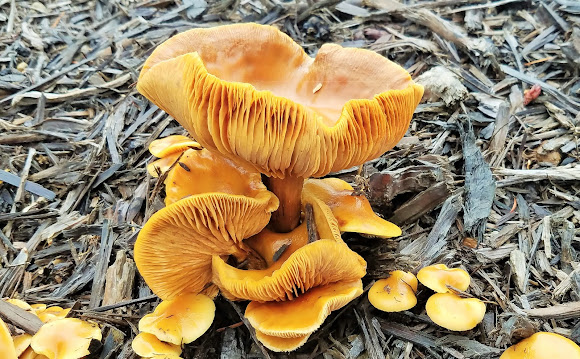 Caramel to chestnut-brown when moist, fading to pale buff or slightly yellowish when dried. Caps generally measure from 1.5–5 cm (½" to 2") across, and are normally distinctly wavy in maturity.

Spotted in wood chips used as erosion control at a construction site near Granite Falls, Washington. In the United States, P. cyanescens occurs mainly in the Pacific Northwest, south to the San Francisco Bay Area. It can also be found in areas such as Western Europe, Central Europe, New Zealand and parts of west Asia (Iran). The range in which P. cyanescens occurs is rapidly expanding, especially in areas where it is not native as the use of mulch to control weeds has been popularized. This rapid expansion of range may be due in part to the simple expedient of P. cyanescens mycelium having colonized the distribution network of woodchip suppliers and thus being distributed on a large scale with commercial mulch. It has been documented to fruit in Spring on the East Coast of the United States. Although it has been speculated that P. cyanescens' native habitat is the coniferous woodlands of the north-western United States or coastal dunes in the PNW, the type specimen was described from mulch beds in Kew Gardens, and there is no widely accepted explanation of P. cyanescens original habitat.(Wikipedia)

Yes. It was amazing - everywhere the woodchips were there was mushrooms, all the same species and in varying degrees of maturity.

Great find Brian,in the second photo are all mushrooms?