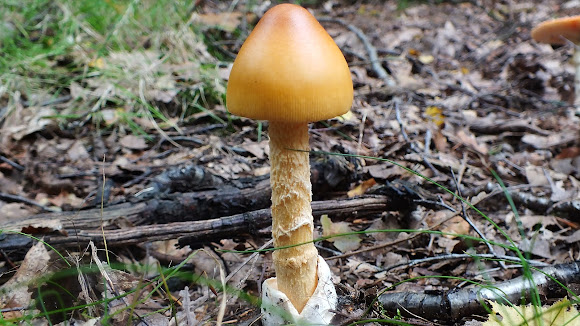 This lovely woodland mushroom varies considerably in colour. 5 - 10 cm in diameter, various shades of yellow-orange with an apricot tinge at the centre, the caps are initially egg-shaped and smooth. As the stem lengthens, pushing the cap out of the volva, the cap expands to become convex or even flat but usually with a small raised central area, an umbo, that is darker than the rest of the cap surface. In very old specimens the cap sometimes turns up at the edge, which becomes markedly striate. The gills of Amanita crocea are cream, crowded, free or sometimes adnexed. There are often a few short gills, of variable length and irregularly distributed. Stems of the saffron ringless amanita are 10 to 15 cm long and 1 to 1.5 cm in diameter, tapering, pale to deep orange, closely matching the cap colour, with a white zig-zag pattern of soft scales. As with the other kinds of grisettes, there is no ring on the stem, but at the base of the stipe there is a large white sack-like volva which is sometimes buried below ground level or in leaf litter.

For my 400th spotting, the saffron ringless amanita or orange grisette. This specie is classified as vulnerable on the 2009 Dutch redlist of fungi and is considered a rarity. Spotted in Paleispark 't Loo in rural area of Apeldoorn, Holland. (sources:see reference)