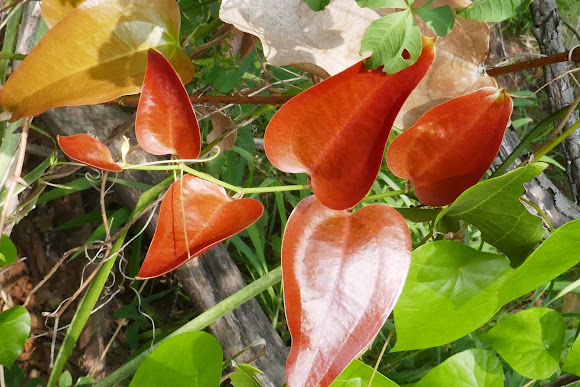 Smilax australis, also commonly known as "lawyer vine", is a member of the family Smilacaceae, and is endemic to Australia. It has prickly climbing stems that are up to 8 metres long with coiled tendrils that are up to 20 cm long. This species occurs in rainforest, sclerophyll forest, woodland and heathland in the Northern Territory, Queensland, New South Wales, Victoria, Lord Howe Island, and the northeastern corner of Western Australia. (Wikipedia) I was drawn to this spotting because of the large, glossy red leaves. They looked so fresh and stunning in the soft sunlight (due to smoke from bushfires). Smilax australis is also a bush tucker species - the leaves make medicinal tea and the fruits are edible.

This spotting was in Toohey Forest, a remnant eucalyptus woodland reserve of approximately 655 hectares. It is situated within an urban area on the south side of Brisbane, within the city limits. The species usually prefers shaded, moist areas. The last three photos in this set were taken in the cool, riparian zone along one of the creeks. Dense undergrowth and thick canopy.

Guide to the plants of Toohey Forest - https://tooheyforesteec.eq.edu.au/wp-con...