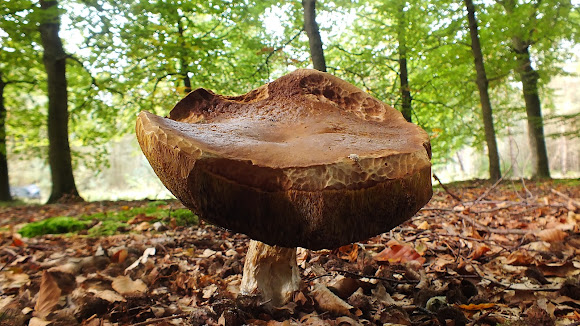 When young the somewhat velvety cap is domed and mid brown, sometimes with an olive tinge. At maturity, the caps turn a darker shade of brown, flattening and frequently splitting and/or developing wavy edges. Typically 6 to 12 cm in diameter but occasionally as large as 18cm, the caps of Tylopilus felleus gradually lose their velvet bloom as they age. Initially pale cream but later turning pinkish, the tubes are round, densely packed and fairly small, terminating in palid pores spaced between 1 and 2 per mm that turn coral pink as the fruitbody matures. When handled and bruised, the delicate pores gradually turn brown. A brown net-like reticulate pattern on the stem sometimes leads to this inedible bolete being mistaken for the choice edible Boletus edulis. The stem of Tylopilus felleus is 10 to 18 mm in diameter, thickening towards the base, and 4 to 8 cm tall.

This ectomycorrhizal fungus is usually solitary but occasionally occurs in small groups beneath oak, beech or other broadleaf trees and very occasionally with coniferous trees.

Not sure if I have the right ID for this one. It could also be Boletus edulis, though the pores of this bolete had a pinkish hue and the stem at the bottom was brownish. Spotted in Paleispark 't Loo in rural area of Apeldoorn, Holland. (sources:see reference)