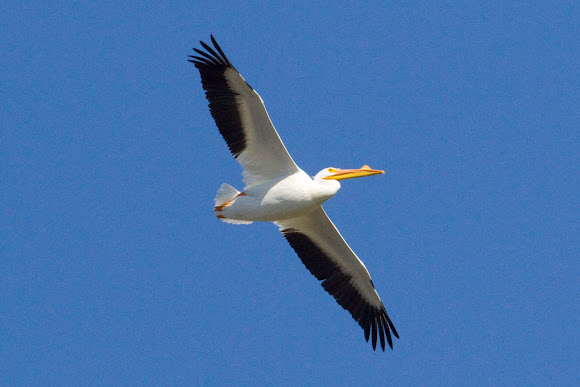 The species also has the second largest average wingspan of any North American bird, after the California Condor. Body weight can range between 9.2 and 30 lb (4.2 and 14 kg), although typically these birds average between 11 and 20 lb. The bill is huge and flat on the top, with a large throat sac below, and, in the breeding season, is vivid orange in color as is the iris, the bare skin around the eye, and the feet. In the breeding season, there is a laterally flattened "horn" on the upper bill, located about one-third the bill's length behind the tip. This is the only one of the eight species of pelican to have a bill "horn". The horn is shed after the birds have mated and laid their eggs. Outside of the breeding season the bare parts become duller in color, with the naked facial skin yellow and the bill, pouch, and feet an orangy-flesh color.[

freshwater lake and wetlands in the California Central Valley

This photo shows an adult in breeding condition, with the "horn" on top of the bill visible.