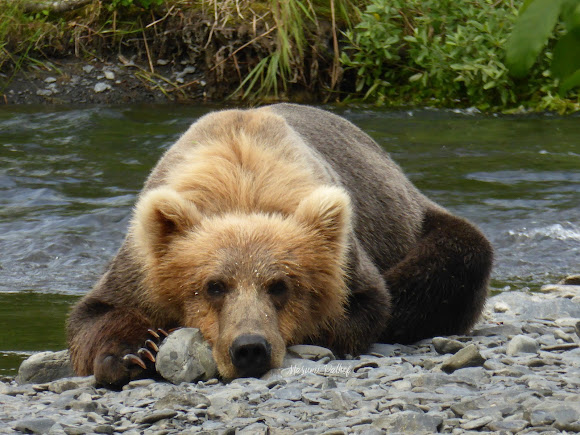 The first photo is of a younger bear that came very close to us but just laid down on the ground a little ways away. I think it was hoping we would walk away from our fish and it could take it for a meal instead of hunting for it. I think the darker, slightly larger bear was its mother. Downstream, they stole a stringer full of fish from a group of fishermen. When we left, we watched from above and the sow was swimming in the middle of the river with her eyes under the water but her ears sticking out looking for fish, and popping up to breathe once in a while. Video: http://vimeo.com/289932684

The first photo shows a young bear, probably a year or two old based on the size and the blonde head. Younger ones often have a lighter-colored head. Second photo shows another bear that was darker and a bit larger, but still not very big. I think it was the first bear's mother. They stayed together for the couple hours we observed them. Third photo shows the younger bear eating some salmon. Fourth photo shows them fighting (not sure if it was play fighting or they were annoyed, but it wasn't a very rough fight). Fifth photo shows the sow looking for a place to cross the river. Last photo shows the large paws and lanky stature of the younger one.

Thanks again everyone! Daniele, I am a resident of Kodiak now. I now just go back to the East Coast to visit family and friends and I'm off the island maybe a couple months a year.

Wonderfull series Machi,perfect spotting,congrats on the well deserved SOTW and thanks for sharing your awesome encounters with us all.

Thanks for the extra details Machi! How much of your time are actually spending on Kodiak?

Congratulations Machi, it is a wonderful series.

Congratulations on your SOTW Machi - a real privilege to see these images. Thanks for sharing them.

Hi Daniele, just a slight correction: the coat doesn't always go from light to dark as they age. Many cubs are darker brown and adults can even be pretty blonde. I think however, that the fully-grown adults generally do not have the lighter color head than the rest of their body like this one, and the younger ones do not always have a lighter head. It is just a good indication when you do see one I think

Congratulations Machi, your charismatic Kodiak bears have been voted Spotting of the Week! Your varied series of images, personal notes and story, and that lively video won you the vote.

"You can immerse yourself in the life of Kodiak bears (Ursus arctos middendorffi) in our Spotting of the Week! The largest recognized subspecies of brown bears, Kodiak bears are found on the islands of the Kodiak Archipelago in southwest Alaska. Their coat color goes from blonde to dark brown with younger individuals often showing a lighter-colored head like the one pictured here. Make sure to check the spotting for more images including river crossing, salmon eating and a lively video of light fighting".

Thanks everyone for the nice comments! And thank you for the nomination. I never tire of seeing these amazing bears.

Wonderful shots Machi I love the first pic. Thanks also for your description and story.

An incredible spotting Machi.. thank you.

Delightful series and description of what you observed

Brilliant series Machi. I love it, thank you for sharing these images with us.