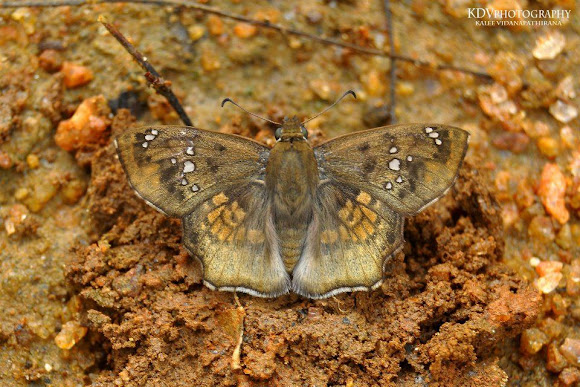 "Upperside fuliginous ochreous-brown. Male ; forewing with three small semi-transparent white spots before the apex (and sometimes one or two very minute spots obliquely below them), two spots within end of the cell, a slender spot between the upper and middle median veins, a larger spot between the latter vein and submedian, and followed below it by two small obliquely disposed spots ; a marginal double row of pale indistinct small lunules ; hindwing with a broad medial discal macular pale ochreous band traversed by brown veins and a spot within end of the cell, the outer discal area suffused with grey-brown. Cilia alternated with white. Female ; forewing with the spots and marginal lunules, and the macular band on hindwing more prominent, the latter also more distinctly bordered with grey. Underside : forewing paler brown ; the basal area greyish-white, the spots with clouded black outer borders ; hindwing greyish-white, the outer margin only being brown, traversed by a curved discal series of small blackish spots."[1] The dry-season form which has been named A. taylorii by de Niceville differs in being ochreous not dark brown above, and in having the disc of the hindwing unmarked with a group of ochreous spots and streaks. A similar variation has been noted by Mr. de Niceville in C. tissa, a not very distantly allied species, and in both cases it is the dry-season form which is the paler. —E.Y. Watson