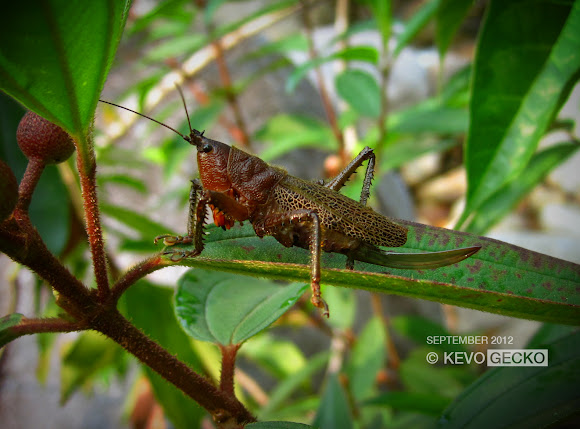 Spotted this in a Senduduk Ungu bush by a clear, pristine and flowing river stream. Thought it was a cricket - it's got a blade of grass for a tail/ sexual organ. It has a horn between it's antennas, so possibly a dragon-headed katydid as Forest Dragon suggested.

Katydids can be found nearly anywhere in the world. Depending on the species, katydids live in tropical, temperate, and arid climates. In the United States they are generally found in temperate or arid areas. They may even be found in some urban areas.

The diet of tettigoniids includes leaves, flowers, bark, and seeds, but many species are exclusively predatory, feeding on other insects, snails or even small vertebrates such as snakes and lizards. Some are also considered pests by commercial crop growers and are sprayed to limit growth. Large tettigoniids can inflict a painful bite or pinch if handled but seldom break the skin. Some species of bush crickets are consumed by people, like the nsenene (Ruspolia baileyi) in Uganda and neighbouring areas.

It's definitely a katydid from these differences chart: http://insects.about.com/od/identifyanin.... Which species? Unsure.

Thanks, FD! That helps me search in the right direction!

Beautiful image! Do you have any other views of her? This is a female Katydid of some type. That sword-like appendage extending from her abdomen is an ovipositor for laying eggs. Grasshoppers don't have these.

This may be a species of Cone-headed Katydid. Though I am not sure which one since I am not familiar with the species in your area.