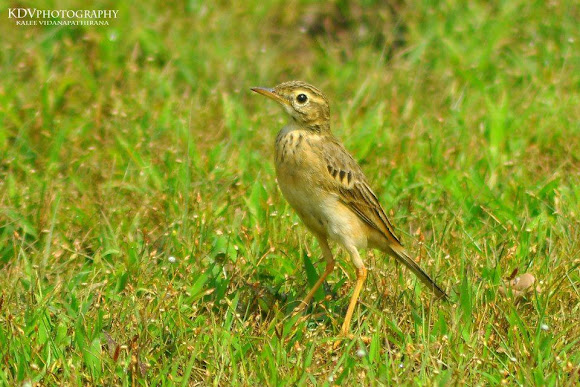 The Richard's Pipit (Anthus richardi) is a medium-sized passerine bird which breeds in open grasslands in northern Asia. It is a long-distance migrant moving to open lowlands in the Indian Subcontinent and Southeast Asia. It is a rare but regular vagrant to western Europe. This bird was named after the French naturalist Monsieur Richard of Lunéville. It belongs to the pipit genus Anthus in the family Motacillidae. It was formerly lumped together with the Australasian, African, Mountain and Paddyfield Pipits in a single species: Richard's Pipit, Anthus novaeseelandiae. These pipits are now commonly considered to be separate species although the African and Paddyfield Pipits are sometimes treated as part of Anthus richardi.