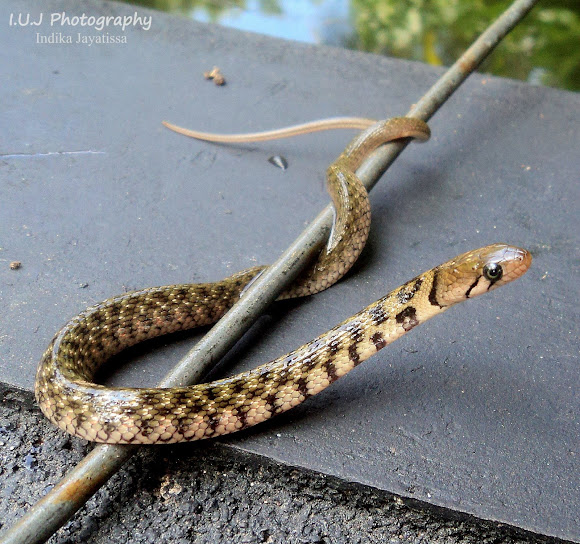 The Checkered Keelback is a medium sized snake. The head is slightly oval in shape and the neck is distinct. The body is cylindrical and the tail is about one third the body length. The Checkered Keelback grows up to about 1000mm in length. How ever its average length is 750mm. The scales are dull.The Checkered Keelback is highly variable in coloration. The belly is pearly white. It is an an aquatic snake. How ever, they could be encountered on land too. The checkered keelback is diurnal in habits, but its nocturnal activities too are observed. It frequents waterways, streams, rivers, ponds, lakes and even wells. It is a common snake in paddy field ecosystems. It is a voracious feeder of frogs and fish. The female lays from 10 to 30 eggs in a hole or crevices in embankments or under leaf litter. The checkered keelback is a very strong snake. When cornered. it flattens its neck region and the fore part of the body and may bite savagely. This character has earned one of the common name water cobra which is non-venomous snake. It has been observed in many places in the country. It is a widely distributed snake, mainly to be seen in the low land plains and on the hils approximately up to 1200m.