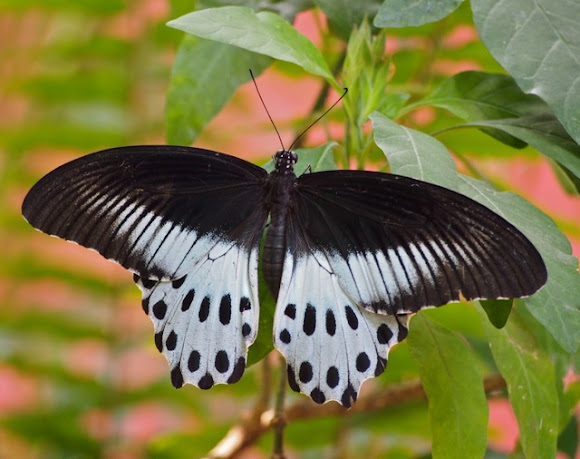 Spotting 1800! I was hoping for a special spotting when I looked out my door, and there it was resting on a palm frond. This is the first one of these beauties I have seen this summer. Maybe because the lime tree is now in flower. They seem to have a habit of resting in the hot afternoons on the palms right outside my door, so I see them quite often. The Blue Mormon (Papilio polymnestor) is a large swallowtail butterfly found in South India and Sri Lanka.

In India it is restricted to the Western Ghats, Southern India and the East coast. It has been recorded as far north as Gujarat. The butterfly is most common in heavy rainfall areas, such as evergreen forests. Also common in deciduous forests and wooded urban areas, primarily due to the cultivation of its host plants, i.e. the Citrus species.

Thank you very much for your kind explanation Pam.
And, Congratulations for "1800"!

@Reiko, Actually when you see these butterflies in nature, the females are between bluish grey and a very pale blue, and the males can be a darker blue. It seems difficult to capture the blue in a photo, maybe the way the light hits the scales.

thanks Yuko, Atul and Maria db

Wow! What a magnificent butterfly! Congratulations on 1,800 spottings!

Beautiful. It looks like colors of black and white, but it is called Blue Morman?

Nice series showing the front and back

This is so beautiful!