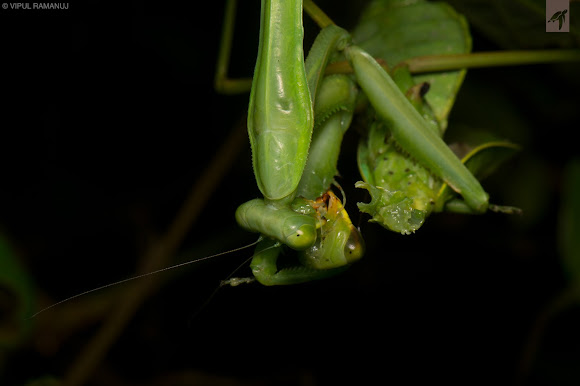 Always heard about the cannibalistic nature of female mantis, finally one monsoon in Agumbe I happened to see it firsthand too! Turns out the female may not always end up eating her mate. Studies have shown that females make a meal out of the males between just 13 and 28 percent of the time. In fact, a study published in 2016 found that when female Chinese mantises consume their mates, they acquire important amino acids that are then incorporated into the eggs they lay. They also appear to lay twice as many eggs after cannibalizing a male than they normally would.

Rainforest and Evergreen forest of Agumbe which is a part of the Western Ghats. It is also recognized as one of the world’s eight hottest hotspots' of biological diversity, inscribed in the UNESCO World Natural Heritage sites list in July 2012

Yes, it is a great spotting, Vipul. Congrats.

Incredible shot Vipul. I'm with you, had heard about this behaviour but unlike yourself, I have yet to witness it :) Great notes. Thank you for sharing :)